Roughly 18 months ago, we posted this article in teknovation.biz about West Knoxville-based Ultrasonic Technology Solutions LLC (UTS) winning a $760,000, two-year Small Business Innovation Research (SBIR) award to design the next generation of a waste management system for space toilet system.

The award came from NASA and was directly related to the challenges involved in the handling or disposal of toilet system waste at the International Space Station. However, as Ayyoub Momen, Ultrasonic’s Founder, reminded us in a recent interview, the challenge will only become more pronounced as space initiatives from pioneers like Jeff Bezos (Blue Origin) and Elon Musk (SpaceX) truly accelerate – no pun intended!

The company posted a 29-second video on YouTube in mid-May that spotlighted its progress on the NASA work, and we followed up with Momen, one of the three individuals in the video, to learn more. The testing was done at zero gravity parabolic flights in Fort Lauderdale, FL.

“It was quite an experience,” he said about testing the technology that UTS is applying to the challenge and doing so under zero-gravity conditions. That’s important since there is no gravity on the International Space Station (ISS). 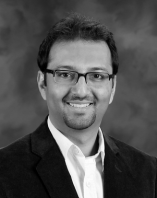 “How people can go to the restroom (on the ISS) is very complex and costly,” Momen (pictured right) explains. The current technology used for the old number two costs about $19,000 each time a toilet is used. That cost is attributed almost entirely to the inability to extract water from human feces safely, and water makes up about 75 to 80 percent of the composition.

For a crew of four astronauts, the unrecovered water adds up to more than 500 pounds annually. Equivalent fresh water must be flown back to ISS from earth, which is highly costly. But, what might happen if the water could be extracted, purified, and reused? Momen believes the payload of human waste that has to be returned to earth could be reduced by a factor of 5x or the number of trips could be reduced by that same factor.

“Water from human feces is the last water unrecovered on the space station,” UTS’s Founder explains, adding, “NASA cannot use conventional systems to do it.” That’s where technology developed for a very different purpose – improving textile dryer performance – can be applied. The technology uses a piezoelectric transducer and the high-frequency vibration that the transducer produces to remove the water, similar to the shaking action of a dog after leaving a body of water.

Developed while Momen was at Oak Ridge National Laboratory, UTS has licensed his invention for commercial and industrial drying applications such as NASA’s needs. 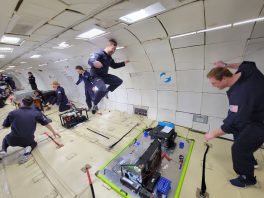 “We got great results from our zero gravity system testing in Florida,” he told us. “We can extract 80 to 90 percent of the water.” A separate technology would be incorporated for the purification component.

“The technology can also improve health and hygiene for those on ISS,” Momen says, eliminating the risk of microorganisms growing by drying the stored feces.

He adds two critical points. First, NASA spent $19 million the last time it purchased a toilet system for the space station. Second, the NASA work will help UTS improve its technology for other commercial and industrial applications.