Innovations in the life sciences and medical sectors were the focus of yesterday’s all-virtual “Spring 2022 Small Business Innovation Conference” organized by the University of Tennessee’s (UT) Procurement Technical Assistance Program, a component of the Center for Industrial Services.

Moderated by Jim Greenwood, a well-known consultant in the federal Small Business Innovation Research (SBIR) and Small Business Technology Transfer (STTR) arena, the session included: (1) presentations from three federal agencies and a subset of one of those that support the sectors; (2) two East Tennessee-based individuals who successfully secured SBIR awards; (3) brief overviews from many service providers across the Volunteer State; and (4) a panel of investors in the sectors. We will cover their insights in an article in the Monday edition of teknovation.biz.

The East Tennessee based recipients of SBIRs were Lia Winter, Co-Founder and Chief Executive Officer of Winter Innovations LLC, and Terrence (TJ) O’Neil, Founder of HD Clean LLC. Both start-ups have been spotlighted in teknovation.biz, particularly Winter and its EasyWhipTM device orthopedic needle. 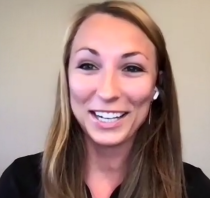 “Our SBIR had a profound impact on me and my company,” Winter (pictured right during yesterday’s event) told attendees about the device which is now in limited release. After being introduced to the SBIR program and initially declining to apply, she said she reconsidered and received a Phase I SBIR from the National Science Foundation (NSF) about a year ago. Winter said it is important to read the SBIR solicitation multiple times and “follow the directions to a T.”

Winter Innovations was first runner-up in the second annual “Ballard Innovation Award,” funded by PYA, the power behind teknovation.biz. 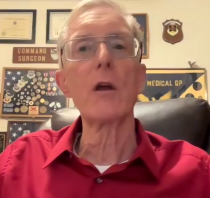 O’Neil (pictured left from yesterday) outlined his journey and all of the individuals and organizations that he contacted for assistance and advice. He got an AFWERX Phase I award as noted in this teknovation.biz “News & Notes” article. O’Neil’s advice to attendees was direct: “Listen to your potential customers. Be ready to welcome serendipity.”

The first federal agency presenter was Henry Ahn, SBIR and STTR Program Director in Biomedical Technologies with the. He earned his M.S. in Biotechnology from UT, Knoxville in 1998 and has held his current role since July 2016.

As noted in yesterday’s edition of teknovation.biz, NSF recently established the Directorate for Technology, Innovation, and Partnerships (TIP) and earlier this week announced a bold new initiative titled the “NSF Regional Innovation Engines” program to significantly expand the country’s innovation capacity. “This is a big deal,” Ahn said, noting it was the first new directorate established by NSF in 30 years. Among the programs that will be relocated to the new organization are the SBIR, STTR and NSF I-Corps initiatives.

Ahn also provided some insightful statistics including these three:

Next up was Stephanie Fertig, Small Business Program Lead for the Department of Health and Human Services (HHS), who primarily focused on the National Institutes of Health. She did, however, note that three other components of HHS – Food and Drug Administration, Centers for Disease Control, and Administration for Community Living – also fund SBIRs and STTRs.

In her presentation, Fertig included a slide calling out 490 BioTech, the Knoxville-based start-up that captured the 2020 Judges’ Choice award during Innov865 Week “Startup Day” and has leveraged more than $2 million in SBIR funding and other grants to keep a fairly undiluted cap table. The start-up’s journey was captured last year in this video produced after it won the inaugural PYA-funded “Ballard Innovation Award.”

Greenwood; Mark Shusterman, Medical Advisor for AFVentures; and Jenna Roueche, Acquisitions Program Manager for AFVentures tag-teamed on the Department of Defense initiatives. “The military is very interested in medical and life sciences,” Greenwood said, with Shusterman later directing attendees to something called the DSIP Innovation Portal. “This is the first place to go if you are interested in doing research with the DoD,” he said.