Two State of Tennessee Commissioners headlined the annual meeting of the Tennessee Advanced Energy Business Council (TAEBC) where both focused a portion of their presentations on the state’s emerging electric vehicle (EV) industry.

David Salyers, Commissioner of Environment and Conservation, spotlighted two Clean Fuels Coalitions, one covering East Tennessee and the other focused on both Middle and West Tennessee, along with the Drive Electric Tennessee (DET) initiative. In the case of Bob Rolfe, Commissioner of Economic and Community Development, he devoted the latter portion of his remarks highlighting the importance of Tennessee’s robust automotive sector.

“The automotive industry is very important to our state,” Commissioner Rolfe said, noting that 140,000 individuals are employed in the sector, and their employers are located in 88 of the state’s 95 counties.

Looking to the future, he said, “We’re going to be focused on recruiting electric vehicle companies . . . doubling down on our efforts.” Tennessee had an early presence in the EV sector with the Nissan Leaf, and now has two other original equipment manufacturers – Volkswagen and GM – with announced plans to produce EVs.

Commissioner Salyers noted that two significant reports were issued by the DET team in 2019 – the first edition of an EV roadmap for the state in January and the “Statewide Electric Vehicle Charging Infrastructure Needs Assessment” in November. The state is preparing for 200,000 EVs on the roads by 2028, although the Commissioner said he thought it would occur much sooner.

Earlier in the meeting, attendees heard from Helge Nestler, Founder of Ginko, a Chattanooga-based start-up focused on developing a mobile technology for the decentralized and direct conversion of yard and wood waste into energy. Nestler, a participant in the TAEBC-operated “Energy Mentor Network” funded by Launch Tennessee, said he would have probably given-up had he not been introduced to the Network and Ira Weiss, his Mentor.

Another speaker was Michael Baute, Director of Regenerative Energy and Land Management at Silicon Ranch, a major builder of solar farms. The new initiative is designed to improve the way the solar industry manages land by normalizing regenerative agriculture practices on solar farm sites. 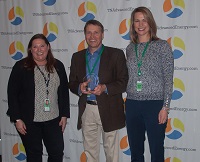