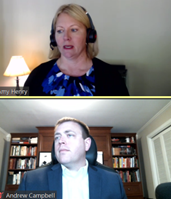 Amy Henry, Director of Transformative Innovation, and Andrew Campbell, Senior Project Manager, were the two panelists who offered their insights during the Thursday midday session which was followed by a Q&A moderated by TAEBC Executive Director Cortney Piper.

While noting that TVA just celebrated its 89th birthday and there would be a commemoration of the 40th anniversary of the “World’s Fair” two days later in Knoxville, Henry added, “We are not dwelling on our past.” She said that TVA was investing in new technologies to provide cleaner, reliable and affordable energy.

Henry noted the public utility’s commitment to achieving carbon-free electric generation by 2050 as outlined in the “TVA Strategic Intent and Guiding Principles” document released a year ago. “Getting to net zero is going to require us to use technologies that have not event been developed yet,” she added. 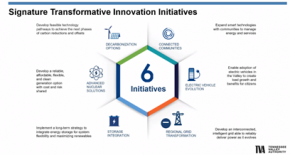 There are six transformative initiatives that TVA and its partners are pursuing to reach its 2050 goal. Each (see page 14 of the document) involves the development of new technologies in: (1) energy storage integration; (2) electric vehicle evolution; (3) decarbonization options; (4) connected communities; (5) regional grid transformation; and (6) advanced nuclear solutions.

Calling out Oak Ridge National Laboratory, Henry highlighted the fact that it is the U.S. Department of Energy’s largest science and energy lab, and TVA is the nation’s largest public power provider and third largest generator of electricity in the nation. “We’re committed to working collaboratively with the lab to advance these initiatives,” she said. In particular, Henry cited the “Innovation Crossroads” program where TVA sponsors at least one participant in a cohort and the “Techstars Industries of the Future Accelerator” which will graduate its inaugural cohort of 10 start-ups this Thursday.

Campbell reviewed work in areas carbon capture and sequestration, alternate fuels, renewables, nuclear, and electrification, noting getting the right mix was “complicated.” After his comments, Henry picked-up on the emphasis on being complicated, saying, “You said it was complicated, and that’s why we need a number of partners.”