Groundbreaking ceremonies are always festive, upbeat events, but there was something that seemed a little more special about Thursday’s hosted by TRISO-X LLC for its new $300 million commercial-scale advanced nuclear facility at the Horizon Center in Oak Ridge.

For sure it was the camaraderie that program participants exhibited, starting with emcee Pete Pappano who introduced most of the speakers and had something personal to say about each. He’s the President of TRISO-X which opened a pilot facility three years ago at Oak Ridge National Laboratory.

“We are going to take our foot off the pedal and take a few moments to reflect on where we have come from,” he told the more than 100 people who turned out for the event. TRISO-X started with one employee, now totals about 60, and will add 400 new jobs by the time the facility is commissioned and operational by 2025.

What stood out most to us was just how important TRISO-X’s new Fuel Fabrication Facility (TF3) is to the nation . . . for energy independence, national security, sustainability, and the environment. It was a theme that each of the speakers emphasized in one way or another. 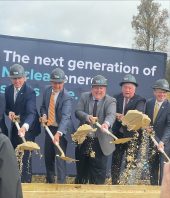 “This is an important day for our state, the country and the globe,” Tennessee Governor Bill Lee (pictured second from left) said. Noting the history of Oak Ridge and nuclear energy, he added, “This is a very big deal for our state and the country.”

The theme for the event was “the next generation of nuclear energy starts here,” something that Third District Congressman Chuck Fleischmann underscored in his brief comments. “This is the first plant of its type in this country in more than 50 years,” he said. “Today’s groundbreaking by X-energy (parent of TRISO-X) is further proof that Oak Ridge is the center of America’s revived domestic nuclear energy industry.”

Clay Sell, Chief Executive Officer of X-energy, underscored the significance of the TRISO-X facility being built in Oak Ridge, saying, “Nuclear energy started here, and the next generation starts here.” In a news release issued (TRISO-X News Release), he added, “It’s our hope and belief that this groundbreaking and subsequent innovations here will catalyze the energy and industrial sectors to move further into the next generation of nuclear energy.”

Also attending and speaking the event were: (1) Kam Ghaffarian, X-energy Founder and Executive Chairman; (2) Kathryn Huff, Assistant Secretary for Nuclear Energy at the U.S. Department of Energy (DOE); (3) Oak Ridge Mayor Warren Gooch; and (4) Lieutenant Governor Randy McNally, an individual whom Governor Lee applauded for “his advocacy for this project.”

So, what exactly is tri-structural isotropic particle fuel which provides the name of the company? In a news release (), Pappano cites DOE which describes it as the most robust nuclear fuel on the planet and explains that X-energy manufactures its own proprietary version of TRISO – TRISO-X – to ensure supply, improve quality, and reduce costs. TRISO-X is a robust nuclear fuel that can withstand very high temperatures without melting, which is key to its safety.

“The fuel X-energy will produce at this Oak Ridge facility will build a more robust and secure nuclear energy supply chain—supporting the deployment of nuclear energy on a scale never seen before,” Pappano added. “With support from the U.S. Department of Energy, we are proud that TRISO-X is leading the commercial development of this safe, innovative technology and that it will be among the first advanced nuclear fuels demonstrated in a grid-scale next-generation reactor.”