An announcement late last week completed what one might describe as a trifecta for Branch Technology, the Chattanooga-based company that describes itself as “an architectural fabricator specializing in large-scale 3D printing.”

In the middle of the week, Branch officially unveiled a bandshell pavilion at Nashville’s oneC1TY development that is billed as the largest 3D-printed structure in the world. It is 20 feet high with a span of 42 feet. That project followed recent announcements that the company had completed installation of the world’s first freeform 3D-printed garden at the Field Museum of Natural History in Chicago and also that it was moving out of the Chattanooga INCubator that it has called home since its founding.

“All three of these things . . . it’s been a good quarter,” David Fuehrer, Director of Development, told us. To say the least, the three represent considerable progress for the nearly four-year old company that we first spotlighted in this July 2015 teknovation.biz article.

One could not think of two better venues to showcase Branch’s capabilities than the heavily-visited Field Museum and Nashville’s oneC1TY that is focused on showcasing sustainable living. We described the plans for the Music City development and the Global Action Platform that is located there in this recent two-part teknovation.biz series (Part 1 and Part 2).

“Platt (Boyd, Branch Founder) had done a presentation at the Urban Land Institute Fall Meeting in 2016,” Fuehrer said in relation to the oneC1TY opportunity. That presentation, which can be viewed here, led to discussions about the bandshell. The project was kicked-off last March and finished a few weeks ago.

According to Branch’s fact sheet on the project, the bandshell pavilion was commissioned by Cambridge Inc. to embody some of the United Nation’s sustainable development goals that oneC1TY is seeking to demonstrate. The original design was digitally created and analyzed but found that it would need a steel sub‐structure for the large spans, more than tripling the project cost. Branch re‐designed the bandshell using evolutionary form‐finding solvers and aerospace industry-derived software, creating an optimum structure needing no steel to make the large 42’ diameter spans, except for anchoring base plates at the foundation.

The Nature Clouds that Branch developed for the Field Museum are part of a larger environment that includes several life size dinosaur installations. The four hanging gardens or clouds comprise 3,940 pounds of printed material and steel that support cretaceous period correct vegetation, hydroponics, lighting, theatrical fog, and sound equipment with a combined weight of 12,270 lbs. Each cloud can be raised or lowered as needed within the museum’s Stanley Field Hall.

Both projects were completed using Branch’s Cellular Fabrication (C‐Fab™) process that is distinctive because it prefabricates volume as cellular matrices.

Projects like these have stretched the company beyond the space that it has occupied in Chattanooga’s business development center, necessitating the move that has already started. In fact, Fuehrer apologized for the noise that we heard in the background during our phone interview. Branch was already moving some equipment to the new location at 1530 Riverside Drive.

The expansion is significant, growing from 5,000 square feet that Branch currently occupies to 40,000 square feet in the new facility. That will accommodate all administrative functions as well as engineering, research and development, product development, and manufacturing.

When the move is completed by the end of the year, Branch will expand from four to eight robots with plans to add more, Fuehrer said. 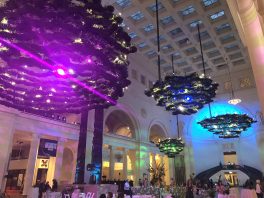