Kalen Berry of Trade ‘Em bested five other student teams to capture first place and $2,000 plus additional professional services during Wednesday afternoon’s “Hatch It” student pitch competition at the University of Tennessee at Chattanooga (UTC).

Sponsored by UTC along with EPB and the Downtown Council of the Chattanooga Area Chamber of Commerce, it was a combination virtual and limited in-person event held in the new home of the Center for Innovation and Entrepreneurship (CIE). The three judges and the six teams of presenters were socially-distanced throughout the 5,700 square foot facility and fully-masked for the competition. Others like me viewed via Zoom.

Berry described Trade ‘Em as a safe and secure marketplace for “sneakerheads,” a rapidly growing market segment in the U.S. Wikipedia attributes the birth of sneaker collecting in the 1980s, which subsequently created the sneakerhead culture, to “two major sources: basketball, specifically the emergence of Michael Jordan and his eponymous Air Jordan line of shoes released in 1985, and the growth of hip hop music.”

Second place and $1,000 plus professional services was captured by Kyle Barton and Duncan Coffey who pitched Pub & Pints. His concept is to provide a staffed, safe urban dog park that allows dogs to play while their owners can have an adult beverage, hence the name. Barton has targeted Knoxville for his first location. 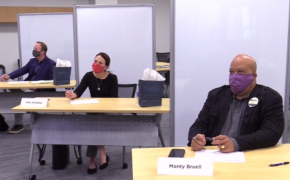 Libby Santin, CIE Director, moderated Wednesday’s event that also featured a presentation by KaDeadra McNealy, a Chattanooga native who launched her own business in Washington, DC while working as a Trade Analyst and completing work on her M.S. in Public Policy at American University. Her entrepreneurial story was spotlighted in this recent article in the EDGE magazine.