A Tennessee-China Network event yesterday that was originally scheduled as a face-to-face discussion in Memphis became a virtual meeting after the rapid evolution of the coronavirus precluded large gatherings.

Titled the “Update on COVID-19: Global and Local Impact,” the event featured mostly Memphis-based panelists since it was intended to be a true face-to-face discussion. One from elsewhere, however, was Corey Ranslem, Chief Executive Officer of IMSA that has its Operations Center in Chattanooga. During his presentation, Ranslem elaborated on the new intelligence that IMSA is offering to the global maritime industry as spotlighted in this recent post. 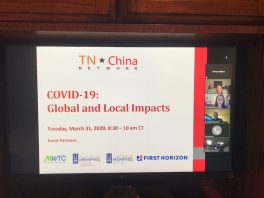 Other panelists covered a variety of aspects on the COVID-19 challenge, mostly related to supply chain and logistics in one way or another. The included: (1) Jalona Falkner, Founder and Principal of The China Connect; (2) Dwight Nordstrom, Chair of Pacific Resources International; (3) Bob Wilson, President of H.Saga/Port Alliance; (4) David Underwood, Senior Vice President of Global Operations for Dunavant Logistics; and (5) Gerald Laurain, Chief Investment Officer at First Horizon Advisors.

As the event began, Elizbeth Rowland, TN-China Network Founder and Executive Director, said that she was transferring the reins of the organization to LuLu Copeland. She launched the organization in the fall of 2014 and has offered more than 100 events since then. Copeland is a former Executive Director of Economic and Workforce Development at Chattanooga State Community College.

Rowland said more than 150 people pre-registered for the Zoom-delivered event, and we noted the high number of participants at about 110.