Knoxville’s Three Roots Capital celebrated its fifth anniversary of business with an event Thursday night under a tent adjacent to the Joint Institute for Advanced Materials at the University of Tennessee (UT) Research Park.

In comments he made during the celebration, Grady Vanderhoofven, President and Chief Executive Officer of Three Roots, noted that the organization has raised more than $100 million since its founding and has deployed three-fourths of the funding. He also emphasized the symbolic nature of the name that draws on the root system of a plant to access important nutrients and the focus of Three Roots – capital, coaching and connections. 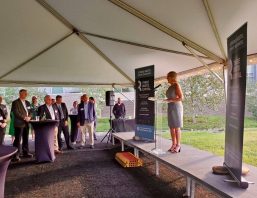 Two featured speakers were Lieutenant Governor Randy McNally and UT, Knoxville Chancellor Donde Plowman (pictured here in a photo posted on social media by the UT Research Foundation). She talked about the importance of organizations like Three Roots in helping building the local innovation ecosystem.

Three Roots also distributed a five-year report that Vanderhoofven said was “fresh off the press,” having been reprinted the previous evening. The document includes financial information as well as examples of efforts that Three Roots funded.