Just a few days short of five months after releasing the results of an assessment of the Knoxville region’s innovation and entrepreneurial ecosystem, the sponsors of that study – Oak Ridge National Laboratory (ORNL), the University of Tennessee (UT), and TVA – officially announced yesterday the launch of the “Techstars Industries of the Future Accelerator.”

The announcement that Techstars was coming was not a surprise; the Colorado-based organization had been recruiting since March for a Managing Director for its Knoxville effort. And, as TVA President and Chief Executive Officer Jeff Lyash said during the virtual January 6 town hall where the report was unveiled, “It’s our job to take this Techstars assessment and operationalize it.”

Among other findings, Techstars cited the region’s strengths, but also noted that it was not perceived as an innovation and entrepreneurial hotspot, something that ORNL’s then Deputy Director Jeff Smith characterized as “the region punches below its weight in innovation.” Even Brad Feld, Co-Founder of Techstars, noted in a cameo appearance at the town hall that he did not realize how close Knoxville and Oak Ridge were geographically before visiting in 2019. 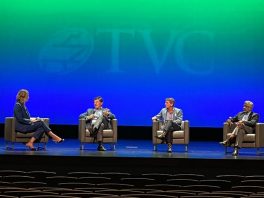 The theme of the accelerator was closely-held until yesterday as was the name of the Managing Director. Both announcements came during an afternoon panel discussion that was part of the final day of the “Tennessee Valley Corridor National Summit” held on the UT, Knoxville campus and also delivered virtually. The panel, moderated by Cortney Piper, Founder of Piper Communications and Executive Director of the Tennessee Advanced Energy Business Council, featured ORNL Director Thomas Zacharia, UT System President Randy Boyd, and Lyash.

Tricia Martinez, an experienced serial entrepreneur who most recently has been serving as a Presidential Innovation Fellow at the U.S. Department of Energy, has been named Managing Director. (See separate teknovation.biz article here.)

The accelerator will begin accepting applications for its inaugural class in July. Over a three-year period, 30 start-ups from across the country and even internationally will come to the region – 10 each year – to participate in the roughly three-month program run by Techstars, the organization that conducted the regional assessment and has established an international reputation for its work.

The theme clearly reflects the diversity of R&D expertise that resides in the region – the country’s largest science and energy lab in ORNL, the nation’s biggest public power utility in TVA, and research and education resources at UT that have won international awards for bringing technology to the marketplace. But, it also represents key areas that will drive the country’s long-term competitiveness and, in the process, position the region as a leading innovation hub and hotspot.

The newest Techstars Accelerator is the first affiliated with a national laboratory, the first located in the Volunteer State, and the first focused on “Industries of the Future.” While not limited at this time, applications are expected to come from start-ups in sectors like clean energy, smart cities, robotization and autonomy, artificial intelligence, quantum technologies, edge computing, sharing economy, cybersecurity and cryptography, the internet of things, 5G and advanced communication, grid scale energy storage, digital currency, Industry 4.0, and battery technology.

During yesterday afternoon’s panel discussion, the top executives of the three sponsoring organizations continually reiterated that they are making the investment to benefit the local community, but the community – business, civic, elected and appointed officials – must engage fully in the effort for it to be successful and long-lasting.

In fact, it was noted that the three organizations have collaborated among themselves over the years to help each other but supporting the “Techstars Industries of the Future Accelerator” is the first time they have worked together on a project external to them.

“We share a passion for making a difference in this community,” Boyd said, underscoring the point with a story shortly after he was named Tennessee’s Commissioner of Economic and Community Development. Saying he initially thought a better title was Commissioner of Jobs, Boyd said he quickly learned the importance of the community to successful economic development.

“It all starts with the community,” Zacharia added. “It (the opportunity) is only limited by our vision and our community coming together.” Lyash reiterated the point, saying that it is “about service to the community to build a thriving community of the future. Ten years from now, I hope we have moved the nation and the region forward.”