About three dozen individuals turned-out at noon yesterday at The Edney Innovation Center in Chattanooga for the soft unveiling of the eight teams in the inaugural “HealthTech Accelerator.”

The attendees included the participating entrepreneurs, mentors, and staff of CO.LAB that has organized the 10-week program along with Erlanger, the nation’s 10th-largest public healthcare system, and Unum, a Fortune 500 insurance company. 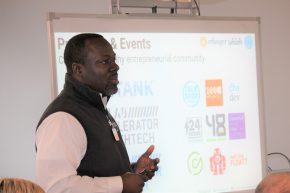 Describing it as “an incredible opportunity” for the eight start-ups, CO.LAB’s Chief Executive Officer (CEO) Marcus Shaw (pictured left) called-out the two sponsors and two law firm partners – Miller & Martin and Chambliss, noting that launching the accelerator would not have been possible without their commitment.

Collectively, the four organizations are providing about two dozen of their employees to serve as mentors for the teams. The mentor who travelled the greatest distance was a Unum executive who came from Portland, ME.

As each of the mentors did a self-introduction, it was clear that this was not the first start-up experience for many of them. In fact, several cited their previous involvement either starting or being part of a new venture, and all seemed genuinely excited about helping the teams.

“Our goal is to help you to increase your customers, your capital, and your capacity,” Shaw told the eight teams during his introductory comments before turning the program over to Jennifer Skjellum, CO.LAB’s Director of Programs. She will be coordinating the activities leading up to Demo Day on June 5.

The eight teams run the gamut from those just getting started to some that have been in business for eight years. There will be a “Meet the Companies Mixer” on April 17.

The eight start-ups, in order that they introduced themselves yesterday, are: