Hosted by the Anderson Center for Entrepreneurship and Innovation (ACEI), the winners were a mobile app to scan perishable foods, a dual-functioning automotive window tint and a straw that detects drink tampering. The pitch competition came during the fifth session of the twice-a-year event where successful entrepreneurs share their experiences during the first three nights, and the fourth session is focused on tips on pitching before the finale. 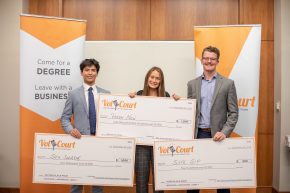 Pictured at right is Fresh Now Founder Taylor Gingrich (center) flanked by Sea Shade’s Do on her left and Safe Sip’s Hawkins on her right.

“Vol Court” is one of three programs helping student entrepreneurs advance their start-up ideas. The others are the “Graves Business Plan Competition” and the “Boyd Venture Challenge.”

“Getting to be a part of Vol Court and learn more about entrepreneurship from people in Knoxville has inspired me so much,” said Fresh Now’s Gingrich, a senior industrial engineering major from Dayton, Ohio. “This money will allow the research and development of the Fresh Now app to continue and hopefully get a prototype version launched.”