A senior administrator for the University of Tennessee (UT) System and a key link between the institution and both the local and statewide innovation ecosystems will soon be leaving the region.

“Dr. Patterson’s stellar track record in research, economic development and leadership makes her an outstanding choice for Florida State University’s Vice President for Research,” McCullough said. “Her expertise in building broad research coalitions with both public and private partners as well as her experience in moving university research out of the lab and into the marketplace will help FSU grow its research enterprise.

The announcement of Patterson’s departure comes a little more than a week after another high profile announcement when Thomas Zacharia, Director of Oak Ridge National Laboratory, said he would retire at the end of 2022. Both have played key roles in the emergence of the innovation ecosystem in Knoxville-Oak Ridge, and their shoes are big ones to fill. 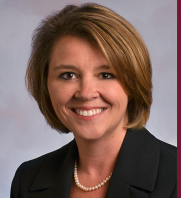 Patterson joined UT as a Licensing Associate at the UT Research Foundation (UTRF) in April 2006 and was gradually promoted. Today, Patterson is President of UTRF, the organization she joined 16 years ago in an entry level role; a key liaison to Oak Ridge National Laboratory (ORNL) and Battelle, UT’s partner in managing the lab; and a point person for UT in the “Techstars Industries of the Future Accelerator” that is underwritten by UT, ORNL and the Tennessee Valley Authority.

The West Virginia native, who also serves on the Launch Tennessee Board of Directors and the Innov865 Alliance’s Steering Committee, begins her FSU role October 15. Mark Riley, Dean of FSU’s Graduate School, has served most recently as Interim Vice President for Research since the April 1 retirement of Laurel Fulkerson. According to the FSU website, the Office of Research manages on average more than $328.6 million in research awards from state, federal and private sources with a staff of more than 115 people.

In the FSU news release, Patterson said, “I’m thrilled to be joining Florida State University and its outstanding community of educators and researchers. FSU has so much opportunity to expand its research and creative activities. I am excited to meet the faculty and staff and get started.”

In an email to staff yesterday, UT System President Randy Boyd wrote: “Stacey has been an invaluable member of my leadership team and has provided great leadership during her 16 years with UT. She joined UT in 2006 and has served in multiple roles including Director of Research Partnerships and as an Assistant and Associate Vice President for Research before being named Vice President 2017.” In that latter role, Boyd continued that “she has served as one of my closest advisors with broad responsibilities in the areas of the management and operations contract for Oak Ridge National Laboratory, research compliance and reporting, research security, state and federal advocacy, technology transfer, commercialization, entrepreneurship, and economic development partnerships.”

Boyd said that he and others will be working in the coming weeks to determine the best path forward to fill her role.

Patterson is a two-time graduate of UT, Knoxville, earning a bachelor’s in biological sciences and doctorate in microbiology. Her master’s in environmental health science came from East Tennessee State University. Patterson subsequently spent three years in a postdoctoral fellowship at the University of South Florida.

Back in Knoxville, she helped co-found 490 BioTech, the winner of the PYA-sponsored “Ballard Innovation Award,” but left the team as she rose in the research ranks at UT. Over the years, Patterson has led a variety of statewide initiatives in Tennessee including securing a $24 million grant from the National Science Foundation for research infrastructure, leading the $62.5 million “Volunteer Solar Initiative,” and securing a $38 million award from the U.S. Department of Energy to launch the new UT-Oak Ridge Innovation Institute.