We were able to attend two in-person events in Knoxville this past week. One was a meet-up, the other an unveiling of a new co-working space in the downtown area. 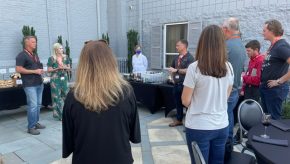 Derren Burrell (pictured in the center in the photo at the right) hosted a “Bunker Connect” event at the Bridgewater Place event center. Held on the outside patio, there were about 20 or so people who attended. Blake Hogan (standing far right), the Nashville-based Chief Executive Officer of Bunker Labs, attended as did Gable Eaton, Founder and Chief Executive Officer of TeqTouch. He shared how Bunker Labs and its  “Veterans in Residence” (ViR) program have helped him grow his business. Burrell hopes to launch the ViR program in the next year in Knoxville. 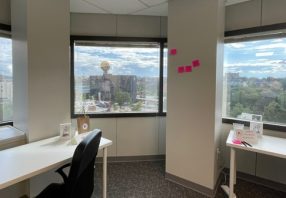 The Aught Co-Working Community held an open house for its second location, this one in Downtown Knoxville. Located on the sixth floor of a building at 520 West Summit Hill Drive, the facility supports women entrepreneurs. Like its West Knoxville sibling, the new location has private offices, shared spaces, meetings rooms, and break spaces. One of the downtown tenants is Holly Holloway of Holloway Event Company, and this is the view of the Sunsphere that she has daily from her work desk.

Erika Biddix, Founder of Aught, opened her first location in late 2019 under a different name but with the same focus on women entrepreneurs. She told us that spaces are still available in the new location, and she is considering franchising for additional locations. “I don’t plan to do another one,” Biddix said.