Spiky.ai, one of the members of the inaugural cohort of the “Techstars Industries of the Future Accelerator,” has announced a partnership with Cisco’s Webex.

According to the announcement, the Spiky Platform is now fully integrated into Webex to analyze meetings and power emotional intelligence metrics. More specifically, the tool empowers companies with:

Spiky.ai uses artificial intelligence to analyze and understand online interactions followed by a suite of algorithms to increase that online engagement. 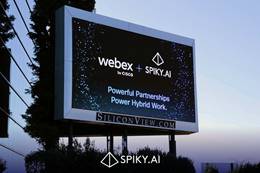 As part of the business arrangement with Webex, Spiky.ai was a featured partner at the mid-June “Cisco Live! All In” event in Las Vegas. The start-up also has touted the partnership in a billboard (pictured left) on the 101 in Silicon Valley.