About 60 people turned-out late Wednesday for the soft opening of the Sky City Co-Working Center in Maryville.

The facility also includes what is described as one of the few places in the county with gigabit network speed along with other co-working essentials – recreational tools (here’s one of the games), coffee, and break areas. The four offices are located in a separate area that is adjacent to the other spaces.

For those from the community, it was their first look at the space that has been finished-out by the Sky City team of (left to right): Jeremy LaDuke of Epic Nine; Christy McDonald Slavick of Maryville College; Rachel Buchanan, formerly with the Blount Partnership and now an entrepreneur with a new start-up named Ardour Enterprises; and Lane Shuler of LeConte Companies.

“Small and mid-sized businesses are the heart and soul of our community,” Buchanan told attendees during a brief program midway through the two-hour event. She leads the not-for-profit organization established to operate the facility.

“Everybody wants to help,” she said, citing a grant from the Tennessee Department of Economic and Community Development as well as funding for two years from the cities of Alcoa and Maryville and Blount County. “This has been a huge community commitment.” Among those in attendance were Maryville City Manager Greg McClain (left), making a point with Blount County Mayor Ed Mitchell.

Noting the evolution of the gig economy, Shuler said a primary focus of the team behind the new co-working space was to “create an ecosystem for freelancers” where creative collisions can occur.

Pictured here are: (1) the large area that houses the “hot desks” available for rent on as little as a daily basis as well as the main reception area, conference room, dedicated desks, and crash area; (2) the “hot desks” available on the daily or longer rental plan; (3) the dedicated desks available 24/7; (4) the area housing the private offices; and (5) one of the four private offices. 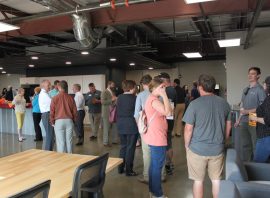 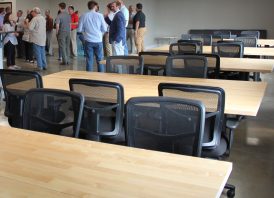 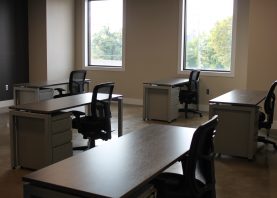 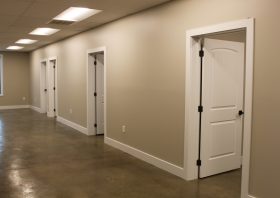 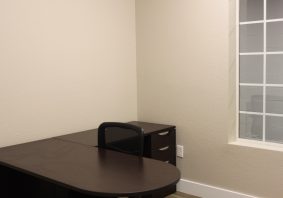