Delivered virtually via the Zoom platform, the event drew more than 270 participants at the beginning to listen to the entrepreneurs who are roughly midway through their two-year Fellowships. In addition to the participants from ORNL, the other presenters included five from Argonne National Laboratory’s “Chain Reaction Innovations” program and five from Lawrence Berkeley National Laboratory’s “Cyclotron Road” initiative.

Yesterday also marked the launch of recruitment for the next cohort for each LEEP program. Applications close at 8 p.m. EST on October 31. More information on the ORNL program is available here. 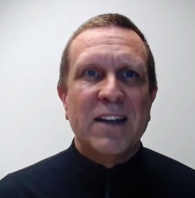 Ahead of the pitches, attendees heard an inspiring message from David Danielson (pictured here in a screen shot from yesterday). As DOE’s Assistant Secretary for Energy Efficiency and Renewable Energy, he conceived the LEEP program and launched it in 2015. Today, Danielson is continuing to champion the cause as Managing Director of Breakthrough Energy Ventures.

Noting that roughly 100 Fellows have participated in the LEEP program and they have raised more than $200 million in investment capital, Danielson said the work underway by the entrepreneurs is crucial to solving the global climate challenge by 2050. “They (the LEEP programs) are working, and the need is even more urgent” than it was in 2015.

He also reminded the Fellows that “opportunities abound . . . but you’re going to pivot, pivot, pivot until you find the right solution.”

ORNL’s Dan Miller introduced the “Innovation Crossroads” session, spotlighting the four cohorts that have participated since the program was launched in 2017 and the more recent addition of TVA as a sponsor.