(EDITOR’S NOTE: This is the first article in a series spotlighting participants in the most recent edition of the Knoxville Entrepreneur Center’s “What’s the Big Idea?” pitch competition.)

“I have a passion and love for travel,” Alexandra Tucker says, adding, “It’s my only hobby.”

Today, the Knoxville native who graduated from Bearden High School and attended Pellissippi State Community College is one of three Co-Founders of a start-up focused on travel industry professionals. Named Sequense, the new venture is doing what its name implies . . . bringing order to the everyday work of solopreneurs or those working in small travel agencies.

“It is the first technology-based solution of its kind which drives efficiency through the automation of hundreds of daily workflow tasks that collectively make up the entire trip planning lifecycle,” Tucker explains. She is a 13-year veteran of the industry, working for eight years at AAA-The Auto Club Group before launching her own firm named Journeys Elsewhere in 2017. 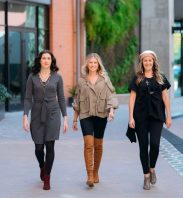 As she and her Co-Founders pursue an aggressive timeline to launch a beta version of the software by the end of the year and version 1 in early 2023, Tucker still has some established clients that she helps, but Sequense is her main focus as the start-up’s Chief Operating Officer. Tucker (pictured on the left in this picture) has two co-conspirators. They are Kimber Falkinburg (right in photo), the Austin-based Chief Executive Officer and Founder of 1977 Travel, and Megan Habig (middle in photo), the Indianapolis-based Chief Marketing Officer and Founder of Restless Mind Travel.

During her pitch at the recent “What’s the Big Idea?” (WTBI) early March event at Scruffy City Hall, Tucker explained that “three travel agents went into a bar and came out with the idea for Sequense.” We wondered if she was serious, and Tucker confirmed that was, in fact, the case during our follow-up interview.

It was at a September 2019 conference when the three Co-Founders conceived the idea. While they are all travel professionals, “We are not technical minds,” Tucker says. Yet, they were also experiencing the same need to find a solution that would automate many of the repetitive processes that travel agents perform.

“The industry is supported by a chaotic mess of fragmented systems,” Tucker explained. “The daily functions of managing and running a travel agency are very repetitive, yet many people still use Post-It notes and whiteboards. We saw an opportunity to develop tools to digitize those manual processes.”

The trio “left the conference that weekend saying this seems like a good idea,” Tucker said, but they needed to answer a few questions: How do we make it work? How do we validate the solution?

About a year ago, the team was sufficiently convinced that Sequense could be a success that they committed to going forward. One of the first decisions was the respective roles they would play. Another was to conduct interviews with prospective customers while also developing the product.

Their initial focus is on U.S.-based travel agents who have a sole practice or those in small shops. At some point in the future, they could develop an enterprise version of the platform. The trio has bootstrapped the effort thus far, but plans are to raise a seed round of funding, probably in the range of $500,000, in the not too distant future.

Tucker had nothing but good things to say about the weekend-long WTBI experience, especially the support from mentors like Courtney Hendricks of the Knoxville Entrepreneur Center and the team at BS+Co. “I would definitely do it again,” she said.