Holly Hanson, Director of the Cumberland Campus of Roane State Community College (RSCC) and the Cumberland Business Incubator (CBI) in Crossville, has another summer of events to celebrate.

The last Friday in July marked the completion of the third “Verizon Innovative Learning Rural Girls STEM Camp” hosted by the college. It is a non-residential experience for sixth, seventh and eighth graders – all females – that is an initiative of the Verizon Foundation designed to introduce more young women, especially those in rural parts of the country, to science, technology, engineering and math (STEM) skills.

Verizon launched a national effort in 2012 to address what it notes as the fact that “millions of under-resourced students here in the U.S. are lacking the technology and skills required for success in today’s digital economy.”

Roane State participated in a pilot Verizon program in 2017-18 that resulted in RSCC receiving a two-year grant to continue the program for 2018-19 and 2019-20.

“It is three weeks Monday through Friday from 9 a.m. to 4 p.m. from July 8 through 26, then 10 Saturdays during the school year from August through May,” Hanson explained. The camp is offered at no charge to attendees.

According to Hanson, the 50 female middle school campers were split into four teams and attended four classes each day. The topics were:

In addition to the classes, the middle schoolers took field trips to places like the Adventure Science Center in Nashville and Tennessee Tech University’s Millard Oakley STEM Center and iCUBE facility.

“We have seen major transformations in the campers and their interest in STEM subjects as well as future careers.,” Hanson said.

The always energetic RSCC administrator also recently took five former program participants to New York City. Picture below in the circle are Hanson and five Crossville students who participated in the trip. 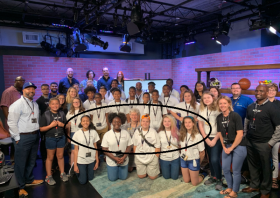