Today’s weekly “News & Notes” feature includes two new recipients of the “Muddy Boot” award, a retirement celebration, the expansion of one of the region’s entrepreneur centers, a new entrepreneurship offering from East Tennessee State University (ETSU) and FoundersForge, another opportunity for student entrepreneurs at the University of Tennessee’s Knoxville campus (UTK), and a record from the “on fire” Music City.

From Knoxville and Oak Ridge:

Jack Dongarra, an innovator in computational software development who holds joint appointments at the University of Tennessee, Knoxville and ORNL, will receive the 2021 “A M Turing Award” from the Association for Computing Machinery.

Often referred to as the “Nobel Prize of Computing,” the award carries a $1 million prize with financial support provided by Google. It is named for Alan Turing, the British mathematician who articulated the mathematical foundation and limits of computing.

A force within the supercomputing community, Dongarra developed software packages that became standard in the industry, allowing high-performance computers to become increasingly more powerful in recent decades. His work laid a framework from which scientists and engineers made important discoveries and game-changing innovations in areas including big data analytics, healthcare, renewable energy, weather prediction, genomics and economics. 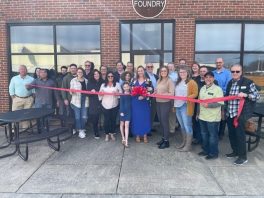 As previously noted, The Biz Foundry in Cookeville held a ribbon cutting this past week to celebrate its expansion into space adjacent to the existing location at 114 North Cedar Avenue. The expansion doubled the space that the member of Launch Tennessee’s Entrepreneur Center network has, adding add eight private offices along with additional conference room and co-working space. 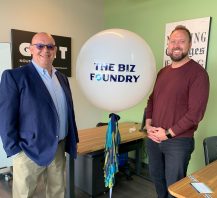 The picture at left of the ribbon cutting brought back memories from more than four years ago when we attended the open house after The Biz Foundry relocated from a facility owned by Cookeville Regional Medical Center to its current location in 2017. Click here for that teknovation.biz article. Also pictured on the right are The Biz Foundry’s Jeff Brown with Heath Guinn of the Sync Space Entrepreneur Center in Kingsport who came for the festivities.

ETSU’s College of Business and Technology has announced a sponsorship aimed at mentoring the next generation of innovation makers and entrepreneurs taking part in the University School Entrepreneurship Club.

According to the announcement, the program is a key component of the college’s broader goal of proactively supporting the start-up community within the Appalachian Highlands. Entrepreneurship Club students will have access to local business leaders and learn key skills and tips from ETSU faculty guest speakers about the entrepreneurship mindset, team dynamics, problem-solving, and pitch practice. In addition to the sponsorship of the club, the college will also host a summer start-up bootcamp in partnership with FoundersForge, a Johnson City non-profit.

The Chattanooga Times Free Press reports that the region’s first Spanish-speaking business incubator program for Hispanics and Latinos is being launched just across the state border in Dalton, GA. It’s a 10-week initiative sponsored by Georgia Northwestern Technical College, Dalton Innovation Accelerator, and a South American entrepreneur who supports other Hispanic entrepreneurs. Applications are being accepted at this link.

Citing a study by RealPage, a property management software provider, Axios Nashville reports that Music City is poised for the largest increase in the country in new apartments built this year — seven percent or more. All those tech workers needed to fill the burgeoning job market need somewhere to live!