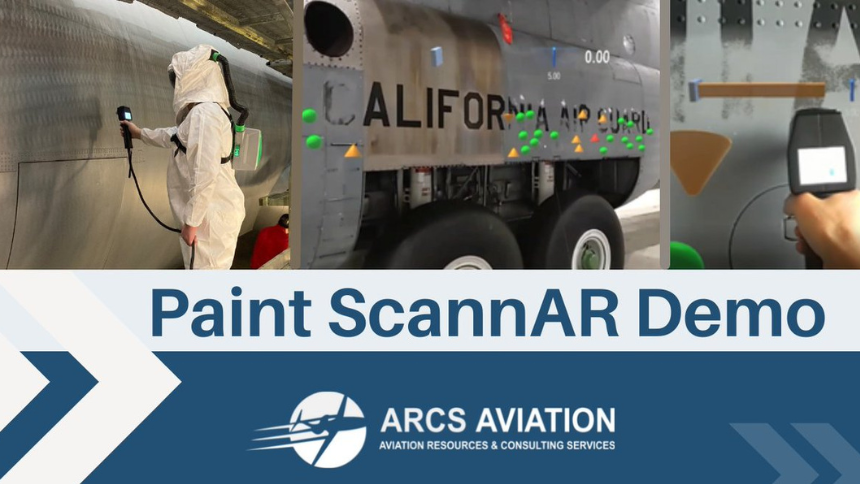 A company founded in Cookeville in 2012 by a retired pilot and Tennessee Tech University (TTU) alumnus was recently named the recipient of a Phase III Small Business Innovation Research (SBIR) award by the U.S. Air Force’s Sustainment Office (AFRSO).

If you follow the federal SBIR and sibling Small Business Technology Transfer (STTR) programs, you don’t read many announcements about Phase III awards, yet it is a significant recognition. As described in this Air Force publication, the purpose of a Phase III is to transition a company’s SBIR or STTR effort into hardware or software products, processes or services that benefit the Air Force acquisition community or the private sector.

In other words, it means commercialization of the previous R&D that the government has funded, and that’s exactly where Barjes Alotaibi, President of ARCS Aviation, and his team are focused over the next two years. The announcement will enable the company to commercialize its Paint ScannAR system, meet cybersecurity requirements, develop new features for users, and implement the system at a second major Air Force maintenance location. Interested government customers can also purchase the ARCS Paint ScannAR system on a sole source basis, provided the purchase derives from, extends, or completes this SBIR effort and is funded with non-SBIR funds.

“This award was made possible by the efforts of the ARCS technical team in developing a functional prototype in Phase II, the ARCS business development team, all of ARCS’ support and enablement staff, our end users at Warner Robins ALC, and the program and contracting folks at AFRSO who treated ARCS well and executed this process in a fair, friendly manner,” Alotaibi says. “AFRSO’s support for innovative small businesses who can solve Air Force maintainer challenges has made a difference for ARCS and many other companies while enhancing Air Force readiness. ARCS looks forward to leveraging this contract into commercial sales and has already started that process.”

As described in this news release, the Paint ScannAR system integrates commercial augmented reality (AR) technology with a third-party paint thickness scanner to present results with data-rich icons within the user’s field of view, tagging the data in the 3D space, showing problems in real-time, and saving results for later review and analysis. Other existing features include digitally tagging observed paint defects such as drips and orange peel, presenting results on a tablet-based digital twin, and presenting feedback to painters on hand speed and distance to target while painting. Future features include providing 3D overlays for sealant and masking materials, adding additional aircraft, and developing an API for new integrations.

The system was described in a YouTube that can be viewed at this link.

The Phase III award is just the latest in several important announcements made by ARCS Aviation in 2022.

The company was founded by Alotaibi who grew up in Saudi Arabia, graduated from TTU in 1986, and spent 20 years with the Arabian American Oil Company (Aramco) including as Chief Pilot for its B-737 fleet.

ARCS Aviation develops technology-based solutions for pilots and maintainers, the latter defined as individuals who perform pre-, post-, and between-flight safety and function checks on aircraft. Those systems include a wide range of training and operations technologies – from courseware to interactive multimedia instruction and technical manuals.

Today, an area of emphasis is not only AR but also virtual, mixed, and extended reality. Why? “Pilots spend too much time in simulators,” Alotaibi says.

Earlier this year, ARCS Aviation launched Ekanos eBooks, a product focused on aircraft maintenance training schools in the U.S. that offers a best-in-class technology training medium that would interest the new generation of students and aid in making their training more accessible and practical. Ekanos eBooks contain animations such as aircraft engines functioning, hydraulic system schematics operating, and so much more. In addition, the reader can perform virtual practices like using a maintenance tool and performing procedures and experiments, all within the e-book.

Alotaibi says his technology timeline plans were impacted by COVID-19, but the company has caught up and has 10 employees, all based in the U.S. All of his revenue before 2019 was from commercial agreements but that number has now dropped to 20 percent.

“Eighty percent of our revenue is now from the Department of Defense,” he says. He credits Paul Middlebrooks and his team with the University of Tennessee Center for Industrial Services and its Procurement Technical Assistance Center for helping with that transition.