An artificial intelligence company founded by a teenager who has not yet completed her high school degree but is also a college sophomore captured the top prize in the pitch competition that concluded Maryville College’s inaugural “Scots Innovation Challenge.”

For Knoxville’s Sofia Tomov, it was the latest in a series of wins for Qardian Labs, her start-up built around an algorithm she developed as a predictor of heart disease risk. The underlying technology uses a data analysis method known as deep learning to find relationships between medical metrics and output the probability that a given patient has heart disease. The software, named HEARO, short for Heart Evaluation for Algorithmic Risk-Reduction and Optimization, achieves 99 percent accuracy on test data.

Tomov was one of five competitors in the Thursday night event. By taking the top prize, she won $1,500 to add to her bank account. She won $15,000 of the $25,000 awarded in the fall 2018 “Boyd Venture Challenge” hosted by the Anderson Center for Entrepreneurship and Innovation at the University of Tennessee Knoxville (UTK).

Tomov is a dual-enrollment sophomore majoring in business analytics in UTK’s Haslam College of Business.

Second place and $1,000 was awarded to Bethany Anderson, a Maryville-based photographer who has a new start-up named Stile & Co. As she described it in her 90-second pitch and also on the webpage, the start-up draws on her professional knowledge and experience “to help other small business owners create beautiful photos of their products without hiring a professional or even owning a nice camera.” Anderson has created “stiles” that are roll able, durable, lay flat backdrops on which makers, for example, can place their wares and make high quality photos.

Third place and $500 went to Maryville College sophomore Caleb Underdown for The Other Way, an online merchandising site that allows college students to sell products they produce. Others competing were Bo Fisher with Trading Post and Alec Dumke.

Pictured in the first photograph are the five competitors – Anderson, Dumke, Tomov, Fisher and Underdown with Maryville College President Tom Bogart preparing to announce the winners. In the second photo, Tomov holds the ceremonial check flanked by Bogart (left) and Suzy Booker, the College’s Vice President for Institutional Advancement. 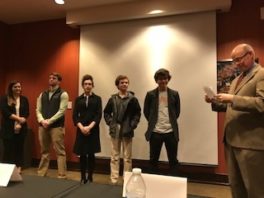