After a weekend devoted to “The Maker City Summit” that kicked-off “Innov865 Week” in Knoxville, PYA, the power behind teknovation.biz, hosted a “Valuation Lunch and Learn” on Monday.

Held in the PYA headquarters in Knoxville, the event drew about 20 people who heard from Anna Bhat, a member of the firm’s valuation service line and Managing Principal of PYA’s newest office in Charlotte, NC. Attendees included two entrepreneurs who will be pitching at Tuesday’s “Startup Day” – John Phillips of Primeaux who also founded Phillips Forged and Douglas Mapp, Founder of ThinkUp – and a third – Corey Tyree of Trillium Renewable Chemicals – who is part of the fireside chat. There were also four current or former members of the “Innovation Crossroads” program who were in the room. 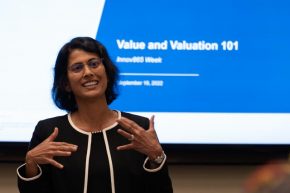 Over a roughly one-hour period, Bhat (pictured right) conducted what she titled as a “Value and Valuation 101” class, outlining four goals. They were to define value, discuss the interplay of risk and return, provide an overview of valuation methodology, and discuss the role of advisors. Throughout the presentation, she was peppered with questions from attendees.

“Value is a financial concept, an economic concept, and a forward-looking concept,” Bhat explained, adding, “Buy versus build is also a good way to think about value,” a reference to whether the potential acquirer is better served to buy the firm rather than try to build its own version. 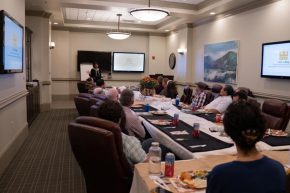 In terms of valuation, Bhat stressed the importance of knowing the reason to conduct the valuation since the process can differ based on the purpose. Is it for tax reasons? Is it for internal strategic planning? Perhaps it’s for bank financing or a pitch event like Shark Tank.