It was an unexpected answer to an icebreaker question that led Daniel Watson and his wife Mandy to start The Restoration House 14 years ago.

Watson said they were at a small group event when someone asked what they would do if they could do anything in life with no boundaries. While he joked his answer was as deep as learning a second language and how to fly a plane, Mandy’s answer was more powerful. She said she would adopt children, buy a large property, and start a ministry to come alongside single moms and their kids.

“Long story short, two months later we owned the first property to start The Restoration House and started quitting our jobs,” he said.

Both Watson and his wife came from mother-led homes. While Mandy’s father and community around her were still in the picture to support her, Watson’s home life was not as structured.

“We kind of felt like we saw both sides of the single-mother coin,” he said.

Like so many in the past year, The Restoration House felt the financial crunch of the pandemic. Watson said annually about 25 percent of the nonprofit’s budget came from fundraising events that likely would not happen. That was when they turned to PYA to help them file for a Paycheck Protection Program (PPP) loan, Watson said. Because their organization is so relationship-based, Watson said they needed to keep all their staff on hand at The Restoration House.

“To have an organization like PYA that’s walking with us on the financial management side gives us a lot of comfort to be able to focus more of our direct energies into the work that we’re doing,” he said. 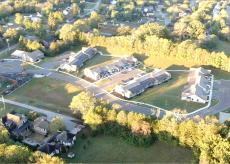 Aerial view of The Restoration House.

Besides taking the stress of financial worry, having the PPP funds also provided The Restoration House the space to “listen well and learn” during the crisis.

“It allowed us to focus more of our energy into really innovating and being creative about the work that we’re doing,” he said. “We would not have been able to spend the same amount of energy asking how we can be stronger at what we’re actually here to do.”

Watson said The Restoration House program has four main components. First is supportive transitional housing. The families live on the property for two to three years. Tenants pay rent based on their income.

Community is crucial to the program. The houses on the property were built to encourage connections between the families living at The Restoration House in the hopes they will support each other. Ally Teams, which are the second component of the nonprofit, also help to build on this “social capital,” Watson said. The teams add to the emotional and spiritual support for families.

“The goal is by the time a family is graduating The Restoration House, they’re in a position to be able to afford market rent or homeownership,” he said. “For us, it’s not about telling them where they should be. It’s about helping them envision where they want to be, and then doing all we can to help them get there.”

Due to the growth of the nonprofit, Watson said they have been able to serve around 100 families since 2014. Around the same time as the TV show aired, giving them a “brief national stage,” The Restoration House added on consulting services to help other organizations working to support mother-led families. They have since helped 27 organizations in 10 states, Watson said.

“We’re glad we were able to [grow] over that period of time,” he said. “That allowed us to grow steadily. If we had 24 homes to start, we probably wouldn’t be here today.”