The second edition of the Nashville Entrepreneur Center’s (EC) “Pitch for Good” series was held Friday. The focus for the first session in May was on start-ups responding to the COVID-19 pandemic. On Friday, it was the “Black Founders Edition” with more than 50 applications received.

Two of the six presenting companies – one in each of the two categories – came from Chattanooga. Gable Eaton of TeqTouch LLC pitched in the “Launch Stage,” while Felicia Jackson of CPRWrap, a company spotlighted in several articles over the years in teknovation.biz, was one of three competitors in the “Up and Running Stage.” 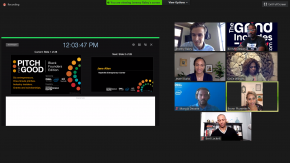 For the roughly one-hour event, the EC recruited an impressive cadre of judges (pictured at right along with the EC’s Brynn Plummer, who moderated the competition, and Jeremy Raley. In alphabetical order, the judges were:

After one-minute elevator pitches and two minutes of questions, the judges selected one winner in each category, while those viewing the Zoom-delivered event voted on an audience favorite.

As described by Eaton, TeqTouch has developed the UTOUCH device. It is a washable wearable covering that users put on their finger for safe interaction with public touch screens. Obviously, with heightened concerns about COVID-19, he expects increased interest in the patented device.

The other two presenters were based in Nashville.