A team of four business students from Pellissippi State Community College captured first place in a recent national entrepreneurship competition for a new app that would make tutoring accessible to struggling high school students regardless of their ability to pay.

The students – Catherine Taylor, Joe Bedford, Jameisha Robinson and Vanya Malmstead – were awarded $1,000 by the National Association for Community College Entrepreneurship for their business idea aclled the East Tennessee Tutor Network. Meanwhile, a second Pellissippi State team – Jeannette Green, Angela Heaverlo, David Scott and Tabitha Uremovich – finished in the top three of the online competition for their business idea, Kids Tech, which would provide tablets with educational apps free of charge for students in first through third grades.

In the picture below, Pellissippi State Associate Professor Mark Fuentes (third from left) congratulates first place winners Taylor, Bedford and Malmstead during the competition that was held in California. 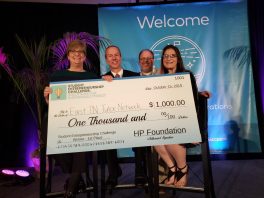