(EDITOR’S NOTE: This is the final article in a series spotlighting Scottie Johnson, a Knoxville entrepreneur who turned his passion for boom cars into a thriving and ever-growing set of businesses.)

Scottie Johnson says one of his more recent enterprises was involved in what was a “new, relatively unknown technology” called ultracapacitors. Also known as supercapacitors or electrochemical capacitors, they are devices which are used for storing electrical energy and operate somewhere between an ordinary capacitor and a battery.

If you’ve read previous articles in the series, you can understand Johnson’s interest.

Ioxus Inc., the owner of IOXUS that manufactured a robust line of supercapacitors, planned to shut down the Oneonta, NY-based company, but the enterprising Knoxville entrepreneur got wind of the news and was intrigued by the possibilities. The initial asking price, which included 100,000 square feet of manufacturing space in New York and Japan, was too high. 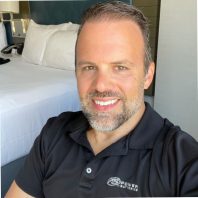 Over time, Johnson (pictured right) said the “opportunity (financial terms) kept getting more favorable, so I decided to take a look.” He liked what he saw and, after an extensive six-month process to make the deal happen, Johnson added IOXUS to his portfolio in October 2020.

“That increased our production capacity dramatically,” he explained.

Also added in 2020 was Trustfall Production Group (TFPG). Headquartered in Las Vegas with an office in Nashville, TFPG is a full service live event production and video integration (installation) company. Johnson says the company has two warehouses in Las Vegas and hopes to build a new facility in Knoxville. It recently completed a ceiling covered in LED screens at Resorts World in Las Vegas.

Johnson began to explore options for adding space to his growing enterprise in Knoxville and learned that the building housing the Knoxville News Sentinel and presses that print a number of newspapers was on the market.

“I contacted the broker who explained to me that the owner wanted to sell four properties as a package,” Johnson said. He obviously did not need all four, but Johnson was still intrigued by the large building.

“One day I was driving by and saw it was still on the market, so I called the broker to inquire. He told me there was a deal in place,” Johnson said. About 30 minutes later, the broker called Johnson and said, “That deal fell through. If you can close by the end of 2021, you can have it.”

Systematic Properties LLC, founded in 2021 as Johnson’s real estate arm, closed on the building December 23, 2021. While Gannett continues to lease much of the space that Johnson saw as warehousing for his businesses, the site includes 40,000 square feet of mostly open office space that he is marketing to businesses. The acquisition also included undeveloped land on the 22-acre site that has numerous possibilities.

Is Johnson done with acquisitions? He says no, mentioning an upcoming addition to the enterprise in audio manufacturing.

The soft-spoken native of Western Kentucky was bitten by the entrepreneurial bug at a young age, and he’s clearly continuing to pursue opportunities.