(EDITOR’S NOTE: This is the final article in a two-part series spotlighting Knoxville entrepreneur and businessman Marcus Hall and his story of success, incarceration, and successful recovery.)

As Marcus Hall worked to stabilize and rebuild Marc Nelson clothing, he characterized how humbling a time it really was with this analogy: “I went from a Porsche to a KIA after prison.”

Yet, thanks to previous customers who returned and new ones that the business secured, he found a revised business model that provided growth opportunities. One part was to expand beyond just denim that characterized the original focus; the other involved targeting fewer but higher volume customers. 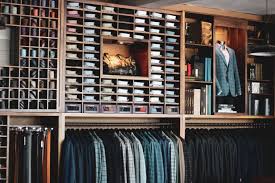 “There are only so many jeans you can sell,” Hall explains. “Blazers make the cash register ring more often.”

Today, Marc Nelson has expanded beyond denim jeans to high-end suits and sportscoats, shirts, shorts, tee shirts, and accessories, all targeted toward the ideal customer.

Early in his journey to rebuild the retail store, Hall answered a call from a businessman in Lakeland, FL who said that he could not find any of the Marc Nelson jeans at his retailer and wanted to buy some directly. That individual was Ronnie Hedrick II, grandson of the Founder of Publix Super Markets Inc.

“I read your story and you got a raw deal. We want to support you,” Hall recalls Hedrick saying. The Floridian also visited the local store several times, the first during a trip that brought him through Knoxville on his way to the Kentucky Derby.

Later, Hedrick and some of his Lakeland friends convinced Hall to open a second location after the local men’s store, which had been in business for 78 years, closed. The Florida store is named Marc Nelson Studio, and the evolution from that unexpected telephone call to a store in Lakeland is captured in another of Hall’s blogposts.

Today, the Founder of Marc Nelson is exploring other expansion opportunities. One possibility is Northeast Tennessee.

“I like serving smaller cities that have a need,” Hall says.

He’s launched The MN Society which is a lifestyle and fashion subscription service, personalized to the customer’s taste and sizes and delivered every other month. Each box is valued at between $250 and $300 and includes premium Marc Nelson Denim apparel and lifestyle products from the company’s partners.

Marc Nelson has also added a new business line providing uniforms to companies in the hospitality industry, and Hall hopes to eventually get back to manufacturing his products.

“I was very fortunate to have a business when I got out of prison,” he says, explaining that he hopes opening his own manufacturing space would support others who have been incarcerated and need jobs.

Looking back on the ups and downs of his life, Hall says his mother and father divorced when he was young, and his mother was on Food Stamps. “Being broke was not new to me.”

Today, he advises others to believe that they can do anything they set their mind to doing, just as Hall has done. “We cannot let one situation define the rest of our lives,” he adds. “Have sympathy and empathy for others and do as much good as you can.”