(EDITOR’S NOTE: This is the second article in a two-part series describing the ways that Knoxville’s Josh Smith is trying to help his community and those who have been incarcerated transform their lives.)

Josh Smith understands firsthand the challenges that an ex-convict faces after being released from prison.

“We need a redemptive mindset,” says the Founder of the Fourth Purpose Foundation that seeks to be a catalyst to make prison a place for transformation, not simply rehabilitation. “Ninety-five percent of people in prison are going to get out. They will be your neighbor.”

After selling Master Service Company in 2019, Smith and Tracy, his wife, committed $8 million – a substantial portion of the proceeds – to the Foundation and its work. He has travelled around the state and nation espousing the importance of creating an environment, both in prison and after release, for those that want the best opportunity to be successful.

“Most people understand the world they grew-up in,” Smith notes. “It’s so easy for them to watch the news and judge everyone of that basis. Yet, there’s a story behind each prisoner.” 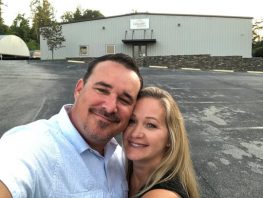 With that in mind, the Smiths (pictured right) built the Foundation on the premise that the biggest problem with America’s prison system is that it does not prepare prisoners to leave. Transforming those who are incarcerated requires transforming the way that those in the country think about prison and its overarching purpose. Josh talks about the four purposes of incarceration – retribution, incapacitation, deterrence, and transformation – and how each needs to shift.

When the couple first announced the launch of the Foundation in this November 2019 news release, the Smiths emphasized these four key beliefs. Josh said, “There’s nothing more dangerous than a person without hope.” Tracy added, “Our goal is to ensure that prisoners leave with the training they need to not only be able to positively contribute to society, but to begin the work of mending their families. We can do that by giving them something to look forward to and by providing them with job and life skills during their incarceration. A strong connection to self, family, and purpose is key to their success upon release. We seek to nurture thus while preparing prisoners for all aspects of reentry.”

His crusade has taken him to places like New Mexico to meet with lawmakers in that state and the 2020 summit of the Correctional Ministries and Chaplains Association and the 2021 conference of the Correctional Leaders Association as a keynote speaker. Josh Smith has written numerous op ed pieces, and the Foundation has launched a video series titled Visitation 2.0 that delivers messages of love and encouragement to individuals and families impacted by incarceration as well as correctional staff.

Josh also served on Governor Bill Lee’s Criminal Justice Investment Task Force that released its report in December 2019 and noted that the Governor mentored in Tennessee prisons two decades ago.

“We’re going to give everyone an opportunity,” Josh adds. “I mentor many (ex-convicts) now. I let them understand they can.”

As the Smiths experienced after Josh was released and they were evicted from their housing, finding an affordable place to live is just one of the challenges ex-convicts face. The Foundation announced a little more than a year ago that it had purchased and was renovating the former Dogan-Gaither Motor Court in East Knoxville to provide housing, counseling, accountability, work placement, and transitional skills training for males returning to Knoxville after being released from prison.

Another challenge is finding a job and being given a second chance, and Josh targets his message to owners of existing businesses. “I challenge them in terms of the status quo,” encouraging the owners to hire more ex-convicts. A key part of those efforts has involved Josh taking business executives to prisons and letting them interact with those incarcerated there.

Finally, to help expand the efforts of the Foundation, the Smiths hired Tony Parker, a 38-year veteran of the Tennessee Department of Correction, as President. He retired as the Commissioner of Correction in November.

“It amazes me to this day that I get to live the life I do,” Smith says, explaining that it is the individual who gets to determine where her or his life goes. And, through the Fourth Purpose Foundation, he and his wife hope to provide that inspiration to help others be successful after they leave prison.