(EDITOR’S NOTE: This is the first article in a two-part series spotlighting Knoxville entrepreneur and businessman Marcus Hall and his story of success, incarceration, and successful recovery.)

Marcus Hall has experienced the highs of what life offers and also the deep lows that individuals sometimes encounter. Today, the Knoxville entrepreneur and owner of Marc Nelson clothing is back on his feet, thanks to what he describes as a “fight with God” after tearing his Achilles tendon soon after arriving in prison. He recalls God telling him, “If it wasn’t for me, you would be dead.”

The forthright Knoxville native shared with us how that late night “conversation” helped him turnaround his life during a little more than 12-month sentence at a Montgomery, AL prison camp and time in a halfway house in Knoxville. Hall and two co-defendants were sentenced after being busted by the FBI for a years-long gambling and money laundering racket.

At the time of his arrest and ultimate sentencing, he was a very successful entrepreneur who owned many properties in Knoxville as well as having launched the stylish denim clothing company. He wrote in this blogpost that “I was heralded in the community as an entrepreneurial leader and role model, and in May of that year I was presented with the ‘Pinnacle Minority-Owned Business Excellence Award’ from the Chamber of Commerce – one of the city’s highest honors. Knoxville celebrated and trusted me. By June, I was sitting in the back of a police cruiser, in handcuffs.”

Hall’s story of how an individual can recover from such a fall from grace should provide inspiration for others who obviously have faced or might face less daunting challenges. Calling his downfall a “very humbling experience,” Hall says what is important is how you respond. “Don’t look at yourself and be down,” he says, adding, “Prove others wrong.” 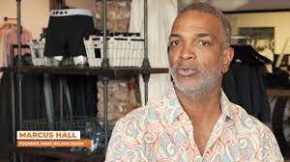 Hall (pictured here in a photo promoting an episode of the Knoxville Entrepreneur Center’s “Made for Knoxville” podcast) recalls very vividly how his world started crumbling fast in mid-2015.

“It was June 8, 2015, and I was just home from a vacation,” Hall explained. “I had a reality show filming the next day at Jewelry TV. I was headed to a meeting at Pilot when I was pulled over by a police officer in an unmarked car.”

Four other unmarked cars quickly followed, and Hall was handcuffed after exiting his vehicle. The FBI agents almost immediately confiscated his car, so Hall called a friend for transportation. His bank accounts were frozen, so he had to call another friend and borrow money to make payroll.

“It was an out of body experience,” Hall says, adding, “I thought my life was over.”

After a year of fighting with the government and being sentenced to 36 months in prison, he surrendered to federal officials on July 11, 2016. Hall forfeited 28 properties and several million dollars, retaining only the 700 East Depot Avenue building where a former employee continued to operate the Marc Nelson store during his incarceration.

In addition to what one might expect, there were other considerations that made it a particularly tough time for Hall as he told Beth Haynes of WBIR-TV in this 2018 interview. There was a daughter that had just been born and a then 15-year old daughter who rode to prison with him.

“I’m going to say it was one of the toughest things I’ve ever had to do in my life,” Hall said of that trip. “The picture of your father walking away from you and going to prison . . . I can’t imagine.  I’m still trying to make up for that, and I’m sure I will for the rest of my life.”

Fortunately, the judge offered Hall, who had a drug problem, the opportunity to be part of the “Residential Drug Abuse Program” (RDAP), an intensive nine-month, 500-hour substance use disorder rehabilitation program administered by the U.S. Federal Bureau of Prisons and offered to federal prisoners who qualify and voluntarily elect to enroll. It involves half-days of programming and half-days of work, school, or vocational activities. Hall immediately jumped at the opportunity, knowing that successful completion would reduce his sentence and result in a move to a “Residential Reentry Center” or halfway house to complete the final six months of his sentence before three years of probation.

That day arrived on August 1, 2017, less than 13 months after entering the Montgomery facility.

While at the halfway house, Hall’s retail business faced an immediate crisis – selling enough of a growing inventory to keep the doors open on the Marc Nelson store just east of the Old City.

“I realized in September that the store had until the end of the year to do $45,000 in sales,” Hall explained. That effort was successful, thanks to the employee who had continued to manage the business and former customers who supported it. The recovery process also resulted in a new business model for Marc Nelson as well as an unexpected opportunity.

NEXT: A new focus and expansion.