(EDITOR’S NOTE: This is the first article in a two-part series spotlighting an effort in Knoxville to turn the Downtown Island Home Airport into a new piece of the city’s “civic furniture.”)

Knoxville Chamber President and Chief Executive Officer Mike Odom credits then Metropolitan Nashville/Davidson County Mayor Phil Bredesen with coining the term “civic furniture.” As noted in this article, the Mayor used the phrase to describe major initiatives that could change the landscape and make the city more attractive.

In the eight years (1991 to 1999) that he served as Mayor, Bredesen’s vision for what could be and where investments needed to be made began to significantly transform the city and set the stage for the economic growth that has occurred in the past two decades. His first big project was the Bridgestone Arena followed by a new, massive Downtown Library, and the momentum quickly built to add other elements to the “civic furniture.”

That same concept of investing in assets that can advance a community is clearly evident by the bold vision of Randy Boyd to catalyze opportunities in a fairly blighted area just east of Downtown Knoxville. The new stadium project and the development expected to follow will add a new piece of “civic furniture” to the community, joining other nearby assets like Ijams Nature Center and its Navitat Knoxville treetop zipline adventure facility, the Urban Wilderness, and the resurgent South Knoxville waterfront and nearby growing mixture of restaurants, craft breweries and residences. If a newly formed nonprofit has its way, the Downtown Island Airport (DKX) will find its place in the community as an important piece of Knoxville’s “civic furniture.” It’s a bold vision that a fledgling group called the “Friends of Downtown Island Airport (FODIA)” has but those involved quickly cite other cities that have created vibrant destinations from similar, non-commercial airports.

About 75 people turned-out on June 30 for the initial grassroots meeting to discuss ways to enhance DKX. The group was clearly diverse – pilots; representatives from the Metropolitan Knoxville Airport Authority that manages DKX, Knox County Sheriff’s Office that operates its Aviation Division from DKX, and the Knoxville Chamber; business leaders; residents of the Island Home Park, South Haven, Old Sevier and South Knoxville communities; and even the President of the Appalachian Mountain Bike Club.

Since then, the founding members of FODIA have engaged with the participants at the inaugural meeting to elect a slate of officers, formally appoint the organization’s board members, and make appearances at other local community group meetings to gather important neighborhood feedback about how DKX can become a bigger part of Knoxville. 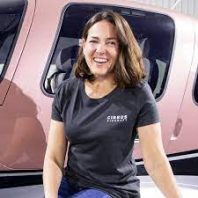 We had the opportunity to meet recently with Ivy McIver (pictured left), one of the key players in the initiative and the recently elected President of FODIA. She’s a resident of South Knoxville, Director of the SR Product Line for Cirrus Aircraft that has its delivery center at the Knoxville Metropolitan Airport, and a pilot who owns her own airplane. McIver grew-up in Rhode Island and has lived in cities like Boston, Chicago, Duluth (where Cirrus is headquartered), Seattle and Salt Lake City.

It’s her first time living in the South but, after five years living here, she says that “Knoxville is a pretty special place – great weather, affordable living, nice people, and wonderful assets. I would love to be a part of making Knoxville an even greater place.”

It also helps that this self-proclaimed “foodie”  finds the area clearly addresses three of her passions – mountain biking, running and food.

McIver tells us that she is one of about eight individuals who have been spearheading the effort. After our interview, it was clear that the possibilities for DKX have kindled a new passion that was fueled, at least in part, by comments made by Greenville, SC Mayor Knox White at the recent “Mayors’ Leadership Luncheon” hosted by Leadership Knoxville.

“He talked about looking beyond what we have now (to the fact) there’s a greater future out there,” McIver recalled. It is that focus on how other cities have capitalized on their non-commercial airports and what DKX could be that is driving McIver and her colleagues.

“Downtown Island Airport is very pilot centric,” she said. “We’ve seen other airports that are community assets. Those that do it well are not focused just on pilots. They have restaurants, pavilions, playgrounds and other amenities that attract local residents and might even be a weekend destination for pilots.”

Ironically, several of the examples McIver cited – Greenville, SC, and Bentonville, AR – are located in entrepreneurial hotspots. Others that are more than just pilot-centered include Driggs, ID, and Buckeye in Arizona.

So, what are DKX’s assets and what more could it become? We’ll explore that question with McIver in the second article in this series.