(EDITOR’S NOTE: This is the first article in a two-series sharing the vision and passion of Deborah Crawford, Vice Chancellor for Research at the University of Tennessee, Knoxville.)

Deborah Crawford makes you feel like she has known you for years when you step into her office in Blount Hall on the University of Tennessee, Knoxville (UTK) campus.

Maybe it’s the genuinely warm greeting Crawford offers. For sure, it’s the smile on her face that seems to always be present and the delightful Scottish brogue that gives you a hint of where she was born – Glasgow, to be exact. Regardless, after an hour of talking, it’s obvious why Crawford’s demeanor, engaging conversational style, and enthusiasm for the region are earning her plaudits since being named UTK’s Vice Chancellor for Research a year ago.

It’s Scottish native’s third time serving as the Chief Research Officer (CRO) at a university. Prior to relocating to Knoxville last August, she held the position of Vice President for Research, Innovation and Economic Impact at George Mason University in Fairfax, VA for more than four years and served a similar period of time as Senior Vice Provost for Research at Drexel University in Philadelphia, PA. 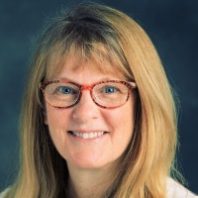 “I had some knowledge of the university,” Crawford told us, explaining that she was a senior executive with the National Science Foundation when the federal agency funded Kracken, the first academic computer to break the petaflop barrier of more than a quadrillion floating-point operations per second. Operational for about five years starting in early 2009, it was located at Oak Ridge National Laboratory (ORNL) and managed by the Joint Institute for Computational Sciences, a collaboration between ORNL and UTK.

Before throwing her hat in the proverbial ring when recruitment started, Crawford says she talked with ORNL Director Thomas Zacharia who, as Associate Laboratory Director for Computing and Computational Sciences, provided the leadership that built the lab’s reputation as a global leader in high performance computing.

“I began to understand the strengths of the institution from soup to nuts, the reach of the agricultural component, its roles as both a Research 1 (R1) and land-grant university, and the possibilities with the enhanced federal emphasis on translational research,” she said.

If those opportunities were not enough, Crawford says a dinner conversation with Chancellor Donde Plowman during the interview process sealed the deal. “I did not know her before the dinner, but after that meeting, I knew I was coming if they offered me the job.”

Another of the distinguishing features that attracted her to the UTK opportunity was the fact that, unlike Philadelphia which she described as a “crowded landscape of R1s,” Tennessee is different with fewer such universities. That translates into more opportunities to have a larger impact.

Now, after 12 months in Knoxville, Crawford offered us her thoughts about the role of a CRO generally and how she is approaching the opportunities that she sees at UTK. It starts with answering a simple, but significant question: “How can we take our assets and create opportunities, not just for faculty and students, but also the citizens of the state?”

Noting that she was involved early in the place-based innovation movement, Crawford asks other profound questions: “How do we inadvertently avoid leaving people out? How do we rethink higher education? It’s a constant engagement of individuals over a lifetime.”

Obviously, a student herself of successful efforts by other universities, she explains that the very best ones distinguish themselves by their multi-disciplinary efforts. In the case of UTK, a clear advantage is the institution’s ever evolving relationship with ORNL, the U.S. Department of Energy’s largest science and energy lab.

“The lab relationship is important, but our future success will not be determined solely by it,” Crawford says, adding, “We have so much more to offer the state, our Nation and the world through the contributions of all of our researchers, scholars and creatives.

NEXT: How she is approaching her role.