From what was said in a Wednesday Zoom briefing about its latest report and what was written in that document, the team at Panoramic Ventures is clearly upbeat about “The State of StartupsSM in the Southeast.” In fact, the tagline for the report underscored that point in five words: “Bullish Outlook Amid Industry Headwinds.”

In the roughly 30-minute webinar session, Mark Flickinger, General Partner and Chief Operating Officer at Panoramic Ventures, provided a high-level overview of the findings and answered several questions. He said at the beginning that the “we were really surprised at how strong the Southeast is. It is doing really, really well.” 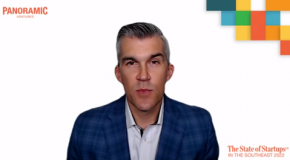 Flickinger (pictured here in a screenshot from Wednesday’s event) noted that the region had its strongest Q1 and Q2 in 2022 of any year in the past decade – $5.5 billion and $6 billion respectively. “It looks like Q3 is starting to slow,” he said, explaining that preliminary numbers show a decline to about $4 billion. “It’s more a drop-off in the number of deals,” Flickinger observed, adding, “There are clearly headwinds. We don’t know where it is going.”

Yet, it is clear that the region is better positioned than it was a decade ago. As one example, there has been an overall six-fold increase from $3 billion in capital invested in 2012 to $19 billion in 2021. The result is that there is now “enough capital (in the Southeast) to support all stages of growth,” Flickinger said. “Companies can stay (here) rather than go somewhere else to raise capital. This is an established region now.”

Another key datapoint relates to the emergence of what Flickinger termed “non-powerhouse states,” a reference to jurisdictions in the Southeast other than Florida, Georgia and North Carolina. Those three states have seen the highest average check sizes and the highest year-over-year (YoY) growth in average check size, but the report called out Mississippi, South Carolina, Tennessee, and Virginia for growth in their ecosystems.

The Magnolia State has already nearly doubled the number of deals done in all of 2021 in the first half of 2022, while the other three are close to on par with 2021.

The report included data on each state. Here are some key points about the Volunteer State:

One other intriguing datapoint that Flickinger cited involved a comparison of 2012-17 and 2017-22. In the earlier period, the number of deals done rose by 84 percent, but the increase in check size was modest. Since then, the average check size has grown by 239 percent while the deal count was up by only one percent.

The report can be downloaded at this link. Its release came just a few weeks after Atlanta-based Panoramic Ventures hosted its latest “Startup Showdown” during Launch Tennessee’s “3686 Festival” in Nashville.