Pitches are in the books for “Startup Day,” awards to be announced Friday

After four 90-minute virtual sessions the past four Thursdays, the Tennessee Valley Corridor commemorated the 25th anniversary of its annual Summit series yesterday with a closing session focused on the all-important topic of education and workforce development and the presentation of the “Corridor Champion Award.”

Launched in 1995 as the “Oak Ridge Summit,” the organization has held an in-person Summit every year since then. However, due to COVID-19, this year’s silver anniversary celebration shifted from a two-day event to the five weekly sessions under the “TVC Virtual Summit Series” brand. 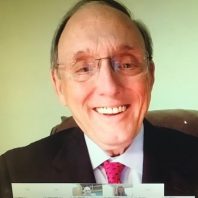 Yesterday’s final program, titled “Meeting the TVC’s Workforce Challenges,” featured a keynote address by Penny Schwinn, Tennessee’s Commissioner of Education; a panel of educators from across the spectrum; and recognition of outgoing First District Congressman Phil Roe (pictured at right after his recognition). The latter, who has served in the U.S. House of Representatives since 2009, will leave office in January after a public service career that includes 12 years in Congress and six years as either Mayor or Vice Mayor of Johnson City. Third District Congressman Chuck Fleischmann presented the “Corridor Champion Award” to his Congressional colleague.

In her comments, Schwinn described how the state quickly responded to the COVID-19 impact in March by focusing on two top priorities – crisis management and response and robust communication. She also discussed steps the State of Tennessee is taking as K-12 schools begin to open.

“We don’t want this pandemic to slowdown the progress that we have made,” she said, noting the state is investing $240 million in education, most of it from state coffers. Those investments include $77 million to disinfect classrooms and provide other resources for cleanliness and $50 million for district technology grants that are providing 150,000 devices for students.

“It’s going to be a challenging year,” Schwinn acknowledged.

She joined a panel that included: (1) Stacey Patterson, Vice President for Research, Outreach and Economic Development at the University of Tennessee (UT); (2) Lottie Ryans, Director of Workforce and Literacy Initiatives at the First Tennessee Development District; (3) Heath McMillian, Executive Director for Education and Workforce Development at Northeast State Community College and Director of the Regional Center for Advanced Manufacturing in Kingsport; and (4) Tanya Foreman, Education Manager at Eastman Chemical Company.

Among the points made during the panel discussion were the importance of partnerships across the educational continuum and the need to encourage more entrepreneurial thinking as a priority in class instruction and other efforts.

With expectations that a return to an in-person event will be possible in 2021, UT President Randy Boyd and UT, Knoxville Chancellor Donde Plowman announced that the event would be held in the new Student Union on the Knoxville campus.

EDITOR’S NOTE: We have chronicled the history of the TVC in a multi-part series. You can find links to those articles below.