Lithium-ion batteries are showing up in more and more products, including most notably in electric cars. But they take a while to charge in large part because of the materials that make the batteries. Researchers at Oak Ridge National Lab (ORNL) discovered a key material that could be the solution to this problem, speeding up charge times faster than ever before.

As the lab explains in a release, graphite used in most lithium-ion batteries is subject to buildup from the electrolyte solution used to help power the battery. That buildup slows down the movement of lithium ions, limiting battery stability and performance. 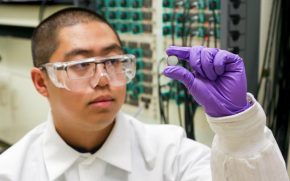 “Because of this sluggish lithium-ion movement, graphite anodes are seen as a roadblock to extreme fast charging. We are looking for new, low-cost materials that can outperform graphite,” said ORNL postdoctoral researcher and first author Runming Tao. DOE’s extreme fast-charging goal for electric vehicles is set at 15 minutes or less to compete with refuel times on gas-powered vehicles, a milestone that has not been met with graphite.

But the material researchers discovered may just crack that code.

They found a “novel compound” of molybdenum-tungsten-niobate, or MWNO. It can recharge quickly and efficiently and has the possibility to replace graphite in lithium-ion batteries.

“The key to the material’s success is a nanoporous structure that provides enhanced electrical conductivity. The result offers less resistance to the movement of lithium ions and electrons, enabling fast recharging,” ORNL said in a release.

If continued research proves successful, this could be a game changer for electric vehicles and other technology that depends on lithium-ion batteries.