On any given Saturday morning, middle school girls across the country are waking up early to attend online computer science classes based in Oak Ridge.

They’re at 10 a.m. local time but attract girls from every U.S. time zone.

That’s not something Proffen expected when he first founded the Oak Ridge Computer Science Girls (ORCSG) in 2017.

“My daughter is probably one of my biggest drivers,” he said. “Just seeing her have an interest in a technical field early on and then working a lot with all-girls teams and seeing how the dynamic changes, how they interact differently.”

The idea came from watching his daughter, Klara, compete on her middle school’s FIRST LEGO League team, a group that builds and programs small robotic vehicles made of LEGO bricks.

“It was 50/50 boys and girls. But still, it seemed to naturally go that the boys would gravitate to the computer and the girls would not,” said Proffen.

His daughter then went on to compete in a national competition called Project CS Girls, CS standing for computer science. Proffen remembers being blown away by the confidence these middle school girls had presenting their projects to a group of just girls. 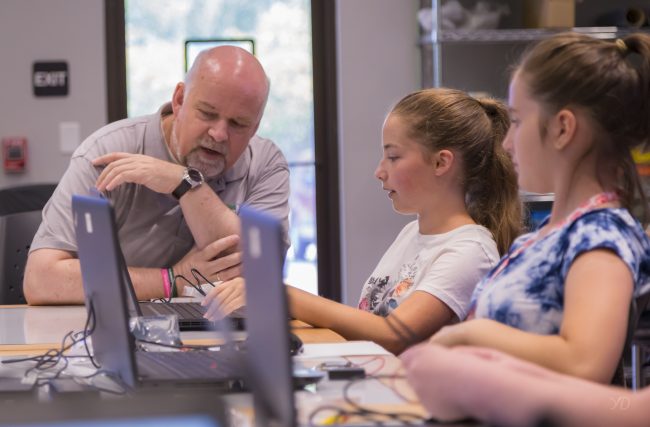 “It was clear there was nothing for my daughter and most likely many other girls where they could be in a girl-only environment and kind of just try different things,” said Proffen.

So he made one.

They started hosting classes every Saturday at the Roane State Community College campus in Oak Ridge. An average of 20-25 girls started coming out for these classes led by Proffen, with help from some of his colleagues at Oak Ridge National Lab (ORNL).

“Science outreach is something I always liked to do,” he said.

“We went virtual and actually expanded our reach really across the country,” said Proffen.

In five years, about 1,100 girls have taken at least one ORCGS class, either in person or online.

Two of those girls are Amelie Nagle and Alex Shanafield. They were both part of ORCSG, volunteered with the group, and are now freshmen at the Massachusetts Institute of Technology (MIT).

Shanafield credits Proffen and ORCSG for getting her to MIT, nearly always ranked as the top engineering school in the country.

“Without ORCSG I don’t think I would be here,” said Shanafield, who’s studying mechanical engineering with the goal of going into robotics. “When I was a sixth grader I did not want to program. I avoided it. But with the ORCSG classes and the mentorship that comes from that,” it made all the difference.

Shanafield and Nagle went through high school robotics together in Oak Ridge, and also happen to be best friends. Nagle, who’s studying urban planning and computer science at MIT, said ORCSG gave her the confidence to follow her passion.

“I think it’s been really important having that one constant community,” she said. “There’s always a little bit of separation I felt like, or there were times when maybe I didn’t feel as confident in my skills just because there weren’t as many people like me around me. But with ORCSG I’ve never felt that way.”

Both Nagle and Shanafield continue to volunteer with ORCSG. They’ve both taught classes in the past, and Nagle hosted a virtual robotics camp for the girls when she was still in high school. 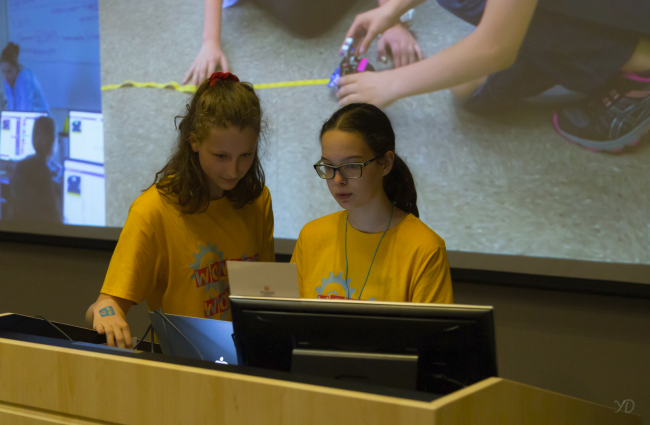 Alex Shanafield and Amelie Nagle teach at a robotics camp in 2019.

As Proffen continues adding classes, he wants these girls to know they can have a future in the science and technology world, just like Nagle and Shanafield are building for themselves at MIT. He said his classes focus on middle schoolers for a reason.

“They’re old enough that they can actually do quite complex things, but puberty hasn’t set in yet, right?” said Proffen. “So in some ways, if you can create excitement and some self-esteem when they are in middle school, then chances are that it might be enough to sustain them, and that interest goes on.”

And there is joy in seeing young girls accomplish things they didn’t think they could.

“I’m not saying girls need to take over the world, although in some areas that might be good,” said Proffen. “But in general, I have to say I prefer a diverse work environment.”

Proffen said there was one coding problem in a class one Saturday that neither he nor his ORNL coworker volunteers could solve.

“The smallest fifth grader we had in class, could barely look over her computer monitor, raises her hand and says, ‘I did it.’ And I’ve never seen so many grown people run to that computer to see how she did it,” said Proffen.

It’s that support that keeps people coming back well after they’ve aged out of ORCSG.

“After I finished the program, I came back because the volunteers that helped me in these classes were so important,” said Shanafield. “I wanted to be there for the girls because somebody was there for me.”

“Clubs like this show that if you are exposed to it and you have a community, it’s very possible to succeed in computer science and other technology fields,” said Nagle.

As Proffen continues to host Saturday classes, he’s always looking for more volunteers. You can learn more about volunteering, or how to sign up for future classes here.