A less than one-year old, Knoxville-based start-up has executed a letter of intent with a nearly 160-year old global chemical company to develop the supply chain for bio-based acrylonitrile (bio-ACN), the primary raw material used in the production of carbon fiber.

The agreement was signed by Brussels, Belgium-based Solvay S.A., founded in 1863, and Trillium Renewable Chemicals, the local start-up led by Corey Tyree, its Chief Executive Officer. 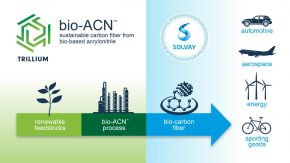 , Trillium will supply Solvay with bio-ACN from Trillium’s planned commercial asset, and Solvay will evaluate bio-ACN for carbon fiber manufacturing as part of its long-term commitment to developing sustainable solutions from bio-based or recycled sources. The long-term goal is to produce carbon fiber for use in various applications such as aerospace, automotive, energy, and consumer goods.

“We are thrilled to be partnering with Trillium which aligns well with our Solvay One Planet commitment to more than double our revenue based on renewable or recycled materials by 2030,” said Stephen Heinz, Solvay’s head of composite research and innovation, in the news release. “Innovation partnerships such as this are driven by a desire to make a real-world sustainability impact. Bio-based feedstocks are a key part of Solvay’s sustainability strategy, and we look forward to being a consumer of bio-ACN from Trillium’s first bio-based acrylonitrile plant.”

For a new venture like Trillium, partnerships with global companies like Solvay are very important. The Belgium-headquartered corporation is a material, chemicals and solutions provider focused on advancements in planes, cars, batteries, smart and medical devices, and water and air treatment to solve critical industrial, social, and environmental challenges. The company has 23,000 employees working at 110 sites in 64 countries and reported $8.9 billion (Euros) in net sales in 2020. 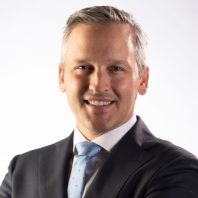 We were not aware of Trillium until Tyree contacted us through an introduction from Jim Biggs of the Knoxville Entrepreneur Center. In our interview late last week, Tyree told us that the technology has been developed over a seven-year period starting with research performed at Birmingham, AL-based Southern Research. Trillium licensed the technology and incorporated in early 2021. Tyree and his family moved from Birmingham to Knoxville last August. Southern Research was also his employer for five years before he left there in March 2020 and ultimately committed to founding and leading Trillium less than a year later.

“We moved to Knoxville because of family,” Tyree says, citing his twin brother who lives in Knoxville as one reason and the fact that Trillium is a virtual company, so headquarters can be anywhere. The start-up has staff in Huntsville, AL; Houston; and Minneapolis that Tyree says has 70 years of combined experience.

As far as acrylonitrile, it is a chemical intermediate with a $15 billion market. It is typically made from petroleum-based feedstocks like propylene. With global concerns about carbon-based materials, Trillium’s Bio-ACNTM process can deliver acrylonitrile from plant-based feedstocks like glycerol with a lower carbon footprint. In addition to that, Tyree expects the bio-based product to be at cost parity, making it able to be more widely used in everything from Legos to golf clubs and car dashboards.

Trillium has raised a total of $11 million thus far with a significant venture capital investment from Capricorn Sustainable Chemistry Fund. As an early stage company, there’s still several years of additional work required to “get the risk out” ahead of plans to have a fully functioning commercial facility online in 2025. For now, pilot scale work is underway at a facility in the West Virginia Regional Technology Park in Charleston where Union Carbide Corporation once operated.

Trillium was also one of nine start-ups selected as a finalist for the Halliburton Labs’ “September Pitch Day.” The wholly-owned subsidiary of the global energy giant provides an environment where entrepreneurs, investors, academicians, and industrial labs join together to advance cleaner, affordable energy.

“The basic science is proven. Trillium is focused on scaling up the technology,” Tyree says, adding, “We have the team and the industrial partners to do that.”