A company that traces its roots to its founding nearly 70 years in Chicago broke ground yesterday on its first manufacturing facility outside the State of Washington.

“This culminates over 70 years of hard work and 50 years as a corporation,” Peter Hedger Jr., Director of Marketing for Magnum Venus Products (MVP), said as he opened the event. MVP is a family-owned business that is heavily involved in providing equipment in the rapidly evolving composites industry.

Yesterday’s event, however, was more than a simple groundbreaking for another manufacturing facility, albeit one that will be 80,000 square feet and hire up to 70 people. It also further solidified the Knoxville-Oak Ridge region’s growing reputation as the country’s epicenter for advanced composites research, development and application.

“The world is changing in so many dramatic ways,” Hedger noted, incorporating the phrase “spyglass of the world” to describe how others have their eyes on the cutting edge developments underway locally. They include the headquarters for IACMI, officially known as the Institute for Advanced Composites Manufacturing Innovation, and both the Manufacturing Demonstration Facility and Carbon Fiber Technology Facility operated by Oak Ridge National Laboratory (ORNL). And, in this teknovation.biz article from earlier this year, Hedger talked about other additions to the region like Local Motors and LeMond Composites.

“This is truly an international company,” ORNL’s Alan Liby, one of the event speakers, said. “It’s not an everyday occurrence to have a company of the stature of MVP have both its headquarters and manufacturing here.”

About 100 people gathered in the Hardin Business Park in West Knoxville to commemorate the start of construction on the new facility that was announced last December. They included Knox County Mayor Tim Burchett, who spoke, and Knoxville Mayor Madeline Rogero, who simply attended as a supporter.

The groundbreaking marked the company’s first manufacturing capability outside Kent, WA, and it culminated more than seven years of work on the part of local economic development representatives.

Their efforts started on an airplane ride back into McGhee Tyson Airport for Hedger and the then new Director of Technology for the Knoxville-Oak Ridge Innovation Valley.

“Jesse Smith was dead set that this was the place Magnum Venus Products was going to grow,” Hedger said. Smith, a former Marine now on ORNL’s staff, is known for his tenacious pursuit of opportunities. When you combine that with his background in polymers and composites, chasing MVP was only natural. 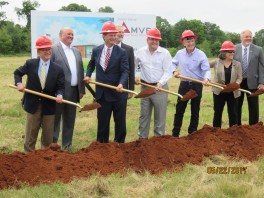