Multiple media outlets, including the very reputable Automotive News (article available here, but only to subscribers) and TechCrunch (article here), reported late last week that Local Motors was ceasing operations as of last Friday, reportedly due to the challenge that most start-ups face – a lack of funding.

That said, we would quickly note that there has not been an official statement from Local Motors, either confirmation or denial of the reports, as of Sunday night even though our Google keyword trap for the name Local Motors produced many similar articles over the weekend.

The company was founded in July 2007 by John (Jay) Rogers. Over the ensuing 14 years, he actually moved his personal residence from Arizona to Knoxville, and Local Motors opened one of its two microfactories – the other is in Arizona – in the Hardin Valley area of West Knoxville. That facility is just the proverbial stone’s throw from the Manufacturing Demonstration Facility operated by Oak Ridge National Laboratory and near the offices of IACMI – The Composites Institute. Both organizations became key partners of the start-up that was a champion of additive manufacturing/3D printing. 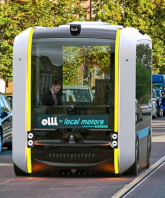 Based on the most recent information we had, Local Motors was still “manufacturing” its Olli shuttle solely at the Hardin Valley facility. For about a year or so, the start-up even had a retail operation on Market Square in Downtown Knoxville that opened in 2014.

Local Motors first splashed on the scene with its Rally Fighter before pioneering the idea of crowdsourcing the production of vehicles with the Olli, a 3D-printed microbus. You can read our numerous articles about the Local Motors’ journey at this link.

As for Rogers, he served as the Chandler, AZ-headquartered company’s Chief Executive Officer until last August when he resigned and former Cummins executive Vikrant Aggarwal assumed the role.

If the reports are accurate, Local Motors is the second autonomous shuttle start-up to cease operations, joining Optimus Ride whose technology, intellectual property, and other assets were acquired by Magna International. Those news events caused David Zipper, a Visiting Fellow at the Harvard Kennedy School’s Taubman Center for State and Local Government, to post this observation on Twitter: “Whatever the future holds for autonomous public transit, it’s unlikely to revolve around self-driving shuttles.”