It might have been best described as “Let Her Ask” when Catherine Porth and the Let Her Speak nonprofit that she leads hosted two events for women yesterday at the Knoxville Entrepreneur Center (KEC) on Market Square. Both were offered under the “Women’s Capital Series” banner and were the first in a three-part series that continues July 28.

About 30 women – there were three men in the room, including yours truly – turned out for the first of two sessions that day, and the attendees were women spanning several generations who have either started businesses or are considering starting one. The lunchtime second session, which drew about two dozen individuals with some overlap, continued the discussion, but also included a focus on women who have an interest or already are investing in start-ups. 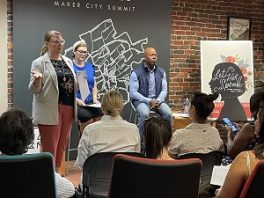 For close to 90 minutes of formal programming and a continuation with one-on-one conversations after the formal program ended until the lunchtime event began, the morning attendees focused on various capital sources for all entrepreneurs in a discussion led by Richard Dapaah, KEC’s Executive-in-Residence, and Erin Reece, Founder of Bear Financial Solutions.

The morning session, titled “Finding the Right Funds for Your Business” and focused on a number of options (from bootstrapping to friends and family, grants, crowdsourcing, loans and lines of credit, and accredited and non-accredited investors), was barely underway when the first question was asked and then the floodgates opened with questions from most of the attendees.

“I just need to find the right person to believe in what we are doing,” one of those in the audience mused. Another soon asked, “How much capital or revenue to do you have to have to get a bank loan?” Fortunately, one of the attendees was Robin Harp, Vice President and a Relationship Manager with FirstBank. She said that there is not a single answer, but something that was very important was to have an established relationship with a banker. “That makes it easier for us to say yes.”

Several attendees inquired about how valuations were established, and the two panelists offered their thoughts. “Valuation is an aspirational number,” Dapaah said. “It is highly subjective,” noting that valuations rose considerably in many sectors during the COVID-19 pandemic and are now falling.

Reece reinforced the subjective description, noting it frequently comes down to who is looking at it (the company) and what they think it is worth. When the discussion turned to the topic of 409A valuations, Eric Dobson, Managing Partner at Sheltowee Angel Network and the third male in the audience, noted that “As an investor, I pay no attention to a 409A valuation.”

Reece reminded attendees about the importance of having an up-to-date balance sheet. “It’s a clear snapshot of your business,” she said.

The lunchtime session featured Sue Malone, Founder and Chief Executive Officer of Strategies for Small Business and a regular judge during the annual “Startup Day” in Knoxville. She relocated from the Bay Area to Nashville about 18 months ago and drove to Knoxville after landing at the Nashville airport at 3 a.m. after a “redeye” flight from California.

Describing herself as a risktaker, Malone started her presentation by identifying three things that she seeks to understand before making investment decisions: (1) Who are you? (2) What’s your track record? (3) Do you have the necessary guts?

“I won’t invest in any business unless you’ve (the Founder) has failed,” she said, explaining the importance of being able to pivot.

During her lively, rapid fire, humorous, and candid presentation, Malone offered a number of other useful insights.