More than 200 individuals, plus a small on-site group, participated in yesterday afternoon’s virtual “Science and the Community” conversation featuring Chris Fall, Director of the Office of Science in the U.S. Department of Energy (DOE). The event was held at Oak Ridge National Laboratory (ORNL).

In his introduction of Fall, ORNL Director Thomas Zacharia noted the emphasis DOE is placing on better integration of national labs into the communities where they are located. That point was reinforced by Fall in his follow-on comments and throughout the roughly 90-minute session.

“It’s not in the DNA of the Department of Energy to do it this way,” Fall said in describing yesterday’s interactive discussion that was the fourth in an on-going DOE series and the first session with an in-person component. “We are laying the groundwork for a longer conversation . . . what it means for the lab to be a good neighbor . . . a good employer . . . and an anchor tenant” in the economic fabric of the community. 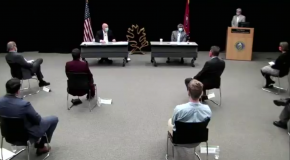 Fall added that DOE wanted to better understand what it means to have a national laboratory in the region, but also what can be done to make it even better. (EDITOR’S NOTE: Here’s a screen shot from yesterday’s event with Fall {left} and Zacharia at the front.)

The first question came from Steve Hicks, Co-Founder, President and Chief Executive Officer of Cadre5, who highlighted the always critical topic of talent recruitment and retention to the region.

“It’s a very complicated topic,” Fall said, adding that the Bay Area is able to attract people who might relocate there because of the vibrancy and volume of job opportunities rather than for a specific job. For other regions, that can be more of a challenge in convincing individuals to pull-up roots and relocate if they do not see a similar set of job opportunities in the community to which they are being recruited, albeit not as large.

Randy Boyd, President of the University of Tennessee (UT), believes the strong relationship that exists today between TVA, ORNL and UT can help address that and other challenges. “A big part of it is connectivity between all of the players,” he said, a point that Zacharia further underscored.

Without mentioning it by name, it was clear that the soon-to-be-released Techstars’ study of the local innovation and entrepreneurial ecosystem was clearly on his mind. He compared the local region with its amenities and assets to Boulder and cited Grenoble, France as a model with its “Innovation for Advanced New Technologies (GIANT)” initiative. It was something that he referenced in more detail during a recent presentation in a session of the “Tennessee Virtual Summit Series.”

“We are beginning to ask ourselves how do we put all of these pieces together,” Zacharia observed.

The new “Oak Ridge Institute” was also a topic of discussion. As noted in this recent teknovation.biz article, DOE provided $20 million to spearhead the effort. Congratulating UT and ORNL on their vision and partnership, Fall talked about it as one of the ways of “breaking down barriers” between universities and national labs.

He also offered this point that captured our attention: “Everything doesn’t have to be on the laboratory property,” citing the recent designation of the Facility for Rare Isotope Beams at Michigan State University as an Office of Science user facility.