For many Knoxvillians, Greenville, SC is an aspirational city. Some just love to visit the dynamic community, perhaps taking advantage of Swamp Rabbit Trail, a popular 23-mile walking/biking trail during the day. Others admire its vibrant entrepreneurial ecosystem. Some love the dynamic downtown that includes shopping, restaurants, hotels, and a new baseball stadium that its owner operates “as if the community owns it.”

At Thursday’s annual “Mayors’ Leadership Luncheon” hosted by Leadership Knoxville (LK), more than 1,200 attendees had the opportunity to hear the story of the Upstate South Carolina community’s transformation under the leadership – there’s that critically important word – of Mayor Knox White. He took office in December 1995 and has been reelected ever since then. It was also at least the second time that White has visited Knoxville to share the evolution of Greenville during his longtime tenure. 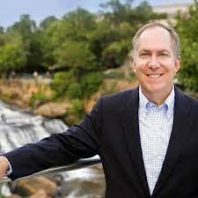 “People collaborate and partnerships come easy in Greenville,” he told the attendees via a virtual presentation. Just hours before his presentation, White had presided at the official opening of Unity Park, a 60-care development near downtown that includes recreational areas, greenspace, and what White described as a “very large section of affordable housing.” The event kept him from speaking in-person.

White described the results that any visitor will see in the downtown area as a product of good planning and good partnerships. And, while he only referenced Knoxville’s proposed new baseball stadium in passing, it was clear that a major reason for his selection as this year’s LK speaker had to be directly tied to those plans.

Fluor Field is located on an abandoned lumber yard that is about a quarter of a mile from Falls Park, an area of downtown that was reclaimed after a bridge shielding the site from public view was demolished and replaced by a pedestrian suspension bridge. Today, Reedy River Falls and the 20-acre park where it is located have become the poster child for Greenville’s downtown renaissance over nearly two decades.

Opened in 2006, Fluor Field nearly replicates the dimensions of Fenway Park, home of the Boston Red Sox for which the Greenville team is an affiliate. What has occurred economically as a result of shoehorning the ballpark into an almost too small space is significant. White cited $1.2 billion in new property value within a half-mile of the stadium in 16 years, 1,300 new business permits, and 700 new business licenses. That is the sort of impact that is visualized for the new downtown Knoxville stadium. 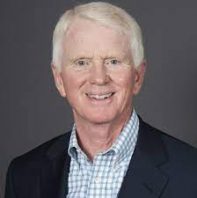 To further illustrate that Fluor Field is not just about baseball, White was joined by Craig Brown, owner of facility and the Greenville Drive minor league team. “We’re Greenville’s front porch . . . the place where the community comes together and celebrates,” Brown said. “We’re open year round for the good of the community. We operate it as if the community owns it.”

One event that he cited occurs during the Christmas holiday season when a Bavarian Village occupies the ballpark. That vision of an asset for the community also sounded very familiar.

White identified three lessons he learned through the stadium project. First was the old economic development adage about “Location. Location. Location.” In the case of Greenville and the ballpark, he said, “We chose an improbable site that needed it.” Does that not sound familiar in terms of Knoxville’s vision?

His second lesson learned was the importance of having a mixed use facility. Noting that people thought the development team was crazy to include condos, White said, “We could have sold more.” Today, there are numerous housing units and hotels near the ballpark as “the area exploded over the next 10 years.” Again, that was a vision that sounded very familiar.

Finally, White stressed the importance of “stewardship . . . an owner who is always doing annual improvements to make the facility better.”

Ahead of White’s presentation, Leadership Knoxville (LK) presented its “Distinguished Alumni Award” to Sharon Pryse, Founder of The Trust Company of Tennessee. The enterprise manages more than $4.7 billion in assets and has 100 employees in three cities. Pryse, a member of the LK Class of 1989, said, “Knoxville has been great to me, and I’ve been pleased to give back.”

And, because it is the “Mayors’ Leadership Luncheon,” both Knox County Mayor Glenn Jacobs and Knoxville Mayor Indya Kincannon spoke. The former challenged this year’s class to “take on the role of being ambassadors for our region,” while Kincannon used a Dolly Parton song – “I Can See the Light of a Clear Blue Morning” – as a backdrop to talk about exciting developments in the city. They included the recruitment of a new Chief of Police and this week’s leadership exhibited by members of the Knoxville City Council in approving a $.50 increase per $100 of assessed value in the city’s property tax rate after reappraisal.