Under a big tent on the site of the former St. Mary’s Hospital, a “standing room only” crowd of more than 700 – 70 tables with 10 seats each – heard Knoxville Mayor Indya Kincannon deliver an upbeat and positive speech about the city even as she acknowledged some key challenges and called for a 50-cent increase in the city property tax rate.

“Knoxville is on a roll,” she said while adding that the city has challenges ranging from homelessness to gun violence and housing affordability that must be addressed.

It was the Mayor’s first in-person “State of the City” presentation since taking office in late 2019, just ahead of the COVID-19 pandemic that has curtailed most large gatherings until recently. The opportunity to engage with citizens was clearly one that the Mayor enjoyed, and the attendees returned her enthusiasm. 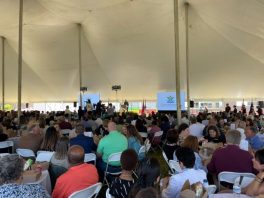 “We have a lot to celebrate today,” she said early in her speech, noting the significance of April 22. Ninety-two years ago, to the day, the Sisters of Mercy dedicated the former hospital on the site that now houses a healthcare campus of Lincoln Memorial University (LMU) and will soon house the City of Knoxville’s Public Safety Complex.

“LMU will invest $50 million on the campus,” Mayor Kincannon said.

Much of her speech was focused on what she described as the “Power of Partnerships,” saying, “Look what we can do when we work together to make good things happen.” That was a reference to the redevelopment of the hospital site that was being abandoned and the vision that former Mayor Madeline Rogero espoused to ensure that the site did not become a blighted property.

But the reference was also a tip of the hat to the 1,600 employees of the city including three she called-out in particular for heroic efforts. “You are all heroes,” she said as the attendees gave the city employees a standing ovation.

Regarding the property tax hike which has been expected, either this year or next, Mayor Kincannon said, “This decision was not made lightly.” A comprehensive study by outside experts concluded that city employees are paid about 10 percent below market value, and the city has reached a crossroads in both hiring new employees and retaining those that are on the payroll.

She said that about 80 percent of the new revenue will go to employee compensation – including a new minimum wage of $15 an hour for all city workers. And Knoxville officials are awaiting the conclusion of a state-mandated property reappraisal by the Knox County Property Assessor and the resulting certified tax rate. It is estimated that the equalized rate – the property tax rate must be adjusted based on the new appraisal numbers so that the process does not result in a de facto property tax increase without City Council action – will be the lowest in the city since at least 1974.

In what she described as investments in “parks, pavement and pipes,” Mayor Kincannon outlined a number of specific priorities that are highlighted in this news release.

Perhaps the best line from her presentation was this one: “Our first responders always have our back, and now we must have theirs,” a reference to the pay increases for them and other city employees.