The organization is new, and Jay Shaffer said they are still trying to “gauge the temperature” on people’s interest in investing in the Chattanooga area. The meeting focused on the funder’s perspective, while the prior two meetings were more about angel investing 101 and accreditation for investors, respectively. Future meetings will cover the founder’s perspective and a topic of the audience’s choice. Read more about prior meetings in this teknovation.biz article. 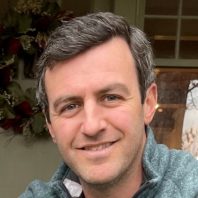 Matthew Patterson (pictured right), Co-Founder and General Partner of The Brickyard, led the discussion. Ten years ago, when he co-founded Bellhops, Patterson and his partner were recruited to come to Chattanooga by the Lamp Post Group, a venture incubator that provided some funding to companies who then were required to move to Chattanooga and work out of Lamp Post office space.

“We credit Lamp Post a lot with getting off the ground,” Patterson said of his experience. “It was so important to us to be surrounded by other VC-backed founders.”

At the time Patterson moved to Chattanooga for Bellhops, he said the city was branding itself as a start-up city. While it still is, he said he was worried the narrative was becoming a little hollow. He decided to found The Brickyard as a new version of Lamp Post.

Similar to the organization that helped propel Bellhops, Brickyard is requiring the companies it invests in to relocate to Chattanooga. Patterson said that in the post-COVID world, this is particularly doable. Many companies and workers have been relocating to the Tennessee area for low cost of living and no state income tax. While this has also made it easier for companies to recruit from anywhere, Patterson said they are encouraging Brickyard-funded companies to look in the Chattanooga area as well.

“We definitely want them to hire locally and invest here as well.”

Brickyard will be opening a 10,000-square-foot office space in May. He estimated that 25-30 companies will be able to work out of the space. Some of the companies Brickyard has invested in have already relocated to the area. Others were waiting for the space to officially open, Patterson said. The office space also includes a number of amenities, including a gym and sauna. “It’s everything we wanted when we started,” he said.

Patterson said that of the 14 deals the venture capital firm has made in the past year, only one company has been local to the Chattanooga area. He also said 80 percent of those deals came from companies within Brickyard’s portfolio. The rest came from a network of venture capitalists the company works with and the occasional cold email.

Brickyard is industry agnostic when it comes to the companies they are looking to fund, Patterson said. He added the firm is wary of healthcare and hardware companies since he and his partners do not have experience in those industries. He also said those types of companies are harder to build.

Brickyard invests between $50,000 and $250,000 in companies, with the average check size being around $175,000, Patterson said. The firm invests in companies that are either in pre-seed or seed rounds. Brickyard uses convertible notes.

During a Q&A session after the main presentation, Patterson said Brickyard is looking for companies that are extremely passionate about their product.

“We want to see that you have an obsession about the problem you’re solving,” he said.