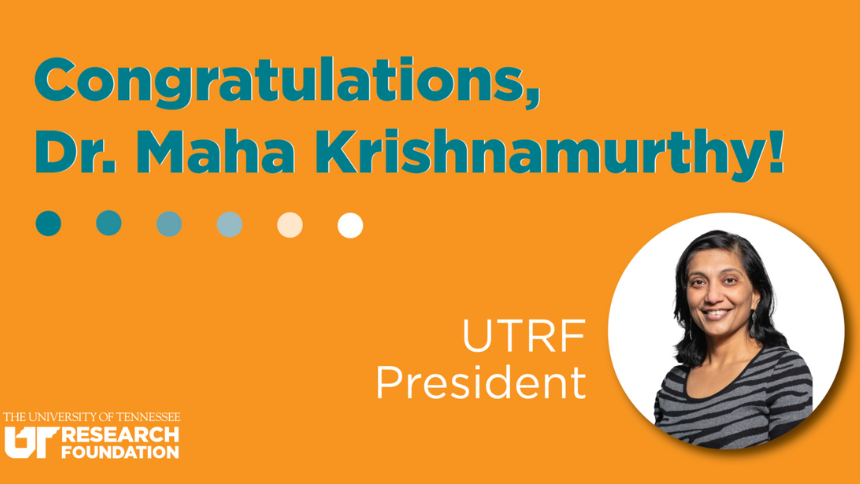 She was serving in the role of Interim President for the foundation and has been involved in local tech transfer and commercialization efforts for nearly 17 years.

Maha Krishnamurthy, a longtime player in the technology transfer and commercialization space locally has been selected as the permanent President of the University of Tennessee Research Foundation (UTRF), pending approval by the organization’s Board of Directors.

The announcement of Krishnamurthy’s appointment was announced on Thursday by UT System President Randy Boyd. She had been serving as Interim UTRF President since October 2022 following the departure of Stacey Patterson for Florida State University.

“Maha’s leadership during her time as Interim President has been exceptional,” Boyd said. “I appreciate her service to the university, and I look forward to continuing to work with her to grow the entrepreneurial ecosystem at UT in this permanent role.”

We first met Krishnamurthy in 2006 when she was pursuing her MBA at UT, Knoxville and helped research market opportunities for Oak Ridge National Laboratory (ORNL) technologies under a pilot program organized and led by Pat Richardson. In May 2007, she joined the team ORNL Technology Transfer team as a Technology Transfer Consultant for the next four years.

Patterson convinced Krishnamurthy to join UTRF in 2011 as a Licensing Associate. Three years later, she was named Assistant Vice President of Licensing and promoted to Vice President for UTRF in 2018. In that role, Krishnamurthy led technology transfer efforts aimed at growing and promoting innovation and commercialization as a part of UT’s research mission. She also has served as President and Chief Executive Officer of TennEra LLC, a subsidiary of UTRF.

“I am honored to serve UTRF in this role, and I look forward to working with system and campus leadership to build a stronger innovation and entrepreneurial ecosystem,” Krishnamurthy said in the official news release. We know from private conversations how much she wanted to be selected and the passion she has for moving UTRF forward.

Krishnamurthy holds a bachelor’s degree from Saint Xavier College in India, a master’s in business administration from UTK, and a Ph.D. in physics from Colorado State University. On the local level, she’s been very involved in the Innov865 Alliance whose signature event is the annual “Startup Day” in Knoxville. Krishnamurthy also was very active working with the inaugural cohort of the “Techstars Industries of the Future Accelerator.”

The UTRF President serves as Chief Executive Officer of the board-managed, non-profit, 501(c)(3) organization that promotes the transfer and commercialization of UT intellectual property, encourages an entrepreneurial culture, contributes to state and regional economic development, and promotes research and education to benefit the people of Tennessee and beyond. While UTRF is a separate entity from UT, it provides assistance and resources to the research activities of faculty, staff, and students at all campuses and institutes across the UT System.