The virtual meeting technology offered as an “event virtualization service” by Lunchpool, the start-up that we have previously spotlighted on teknovation.biz, was on display yesterday at a fundraising “luncheon” to benefit The Muse Knoxville.

Originally scheduled as a traditional luncheon, the format had to be changed. More than 80 individuals participated in the virtually-delivered event that was championed by Brandon Bruce, the well-connected Knoxville Entrepreneur who first introduced me last fall to Alex Abell, Co-Founder of Lunchpool. Initially founded to connect co-workers who did not know each other over lunch, hence the name, the start-up has added the virtual event capability in response to the isolation-at-home practices that so many of us are following.

Yesterday’s event was our first opportunity to see exactly how the new product works. Food, if desired was self-provided, but we found the technology to be neat. 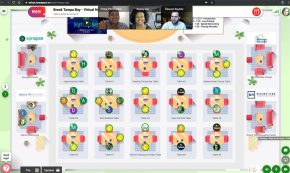 To fully appreciate the Lunchpool offering, you first need to imagine a different way to network in this safe distancing environment. Abell and Pooja Pendharkar, his Co-Founder, organize virtual events featuring a room layout with tables that is interactive (see the drawing). Those “attending” yesterday’s event literally bounced from table-to-table as they would at a traditional luncheon before the program starts, meeting with others at a specific table and chatting before moving on. The only difference from normal networking was that we connected via video rather than up close and engaged in virtual handshakes.

The short formal program was delivered more as you might imagine, albeit with mostly full-screen video.

While this was not promoted as a possibility – after all, The Muse is focused on kids, one could imagine some of those virtual happy hours that several start-ups have organized for their remote teams being enhanced by the Lunchpool offering that allows video conversation, public or private text-based chats, and maybe a short message from the Chief Executive Officer.

Lunchpool’s technology accommodates up to 800 users online for an event.