Organized by Life Science Tennessee as a complement to the “3686 Festival” and sponsored by FedEx Custom Critical, the event featured Erin James Coward, a Memphis native who grew-up in New Orleans, and now lives in Atlanta. She’s the company’s Regional Executive, Southern Region – Healthcare Services & Life Sciences. Coward’s LinkedIn profile shows a strong commitment to the start-up world. She serves as a Limited Partner in Collab Capital, is a member of the HealthTech Strategy Steering Committee for RevTech Labs, and is a mentor for the “Techstars Founder Catalyst Program,” a collaboration with JPMorgan Chase. 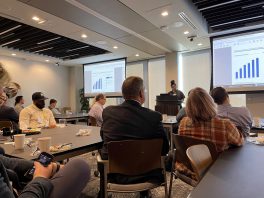 In her role, Coward said JPMorgan Chase serves clients ranging from big pharma to start-ups in a “life science market (that) has experienced its share of volatility. Investors remain focused on macro drivers. People are telling us this is uncharted territory.”

Noting that there was a record pace of life science sector initial public offerings (IPOs) in 2021 –  130 to be exact, Coward added, “From an M&A perspective (mergers and acquisitions), we have seen it pick-up (this year) but lower valuations.”

She explained that “strategies are shifting” as companies consider macro uncertainty, the valuation gap between pharma and broader markets, and the strategies of pharma companies in light of the challenging financing environment.

“They (big pharma companies) are exploring everything from M&A to partnerships,” Coward said, citing six examples where partnerships established earlier have been turned into acquisitions.

She identified three key considerations in evaluating whether to pursue a merger or acquisition versus an IPO. They were: (1) time to liquidity; (2) ownership dilution; and (3) risks to achieving expected future value.

“Remember that an IPO does not guarantee an M&A event,” Coward advised.

She told attendees that her firm will return to Nashville next year for its second annual “Nashville Healthcare Leadership Summit.” A complement to the firm’s annual “Healthcare Conference” hosted in San Francisco, the 2023 Nashville event will be held April 26 and 27.