As Knoxville attracts and supports more makers, there’s always a need for new maker spaces. Whether that’s coworking space, shared equipment, or a place to set up shop, more options are coming onto the scene.

One of those options geared toward stylists and tattoo artists is Local Collective, which just opened its doors off Central Avenue at 104 E. Fifth Ave. in North Knoxville in September.

Owner Nick Moran is a tattoo artist by trade and is not new to the idea of a creative coworking hub.

“I opened, to my knowledge, the first booth rental tattoo shop in Knoxville which allowed tattoo artists to keep all of their money instead of giving half of it away in commission, which is the industry standard,” he said.

That was in 2020. You can visit that shop, Riverside Tattoo, in the Old City. Shortly after opening there, he learned tattoo artists aren’t the only ones who often pay a large chunk of their proceeds back to a shop owner.

“I had two stylist friends of mine that approached me,” said Moran. “They had been to my tattoo shop and said that they had wished they could work in a salon structured like my tattoo shop. So I said, I’ll open one for you.” 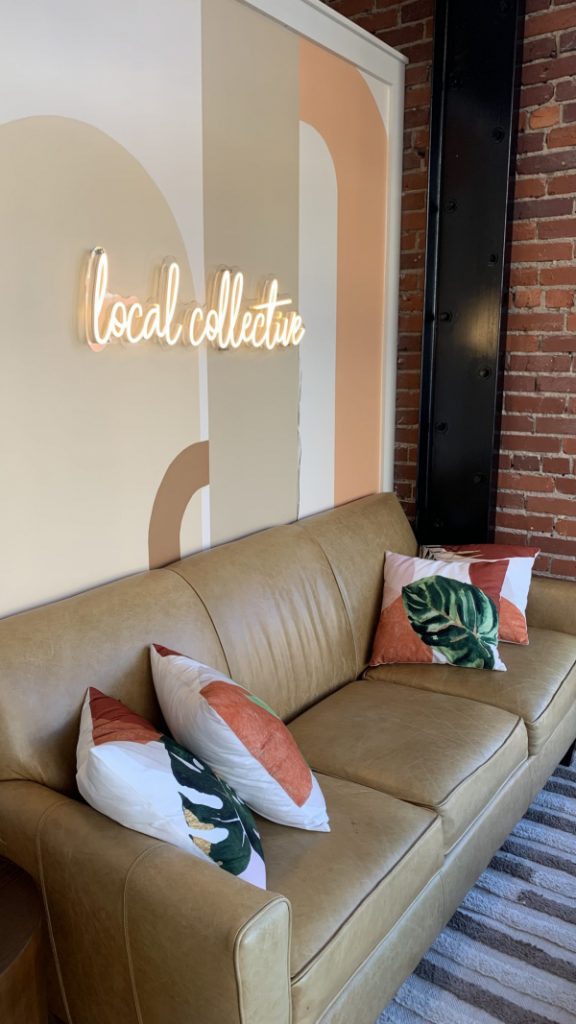 Inside the lobby of Local Collective.

That’s how Local Collective came to be, catering to any creative or small business that wants booth space or a storefront.

At the time of this interview in October, Moran had two hair stylists moved in with two more on the way and three suites still available.

One of those stylists is Lily, owner of Sleek and Destroy. “I just wanted to work for myself,” she said.

She now has her own space at the Local Collective that she’s painted to resemble the Smoky Mountains and filled with music posters and snacks.

“I’ve been a business owner most of my life, and I love business and I really like educating people on the idea that it’s not as daunting and difficult as what they think,” said Moran.

“There are several places like this that already exist that cater specifically to stylists or tattoo artists,” said Moran. “But I think breaking down the barriers of having to have one type of business in a building could do a lot for the local economy.”

Moran interviewed a potential coffee shop to open up in one of his spaces. He said he doesn’t have an ideal tenant, just someone who will use the space to grow. He’s hoping to make owning a small business more accessible.

“Long term I would like to open more locations,” said Moran. “This is a first just to test the model and it seems to be going well. I’d like to open more in other neighborhoods of Knoxville and maybe even other cities that I’m passionate about.”

As far as Knoxville is concerned, Moran said he struggled at first to find a landlord willing to take him up on his business idea. But overall, the city’s been a great environment for his ideas to grow.

“The city is easy to work with, in my opinion, compared to other cities,” said Moran. “And Knoxville being so small geographically makes it feel a little denser. So I feel like networking and spreading the word about businesses seems to be a little easier than in a larger city where you kind of get lost in the mix.”

Local Collective is still taking applications to fill those final three suites. You can apply here and check out their Instagram page for more information.