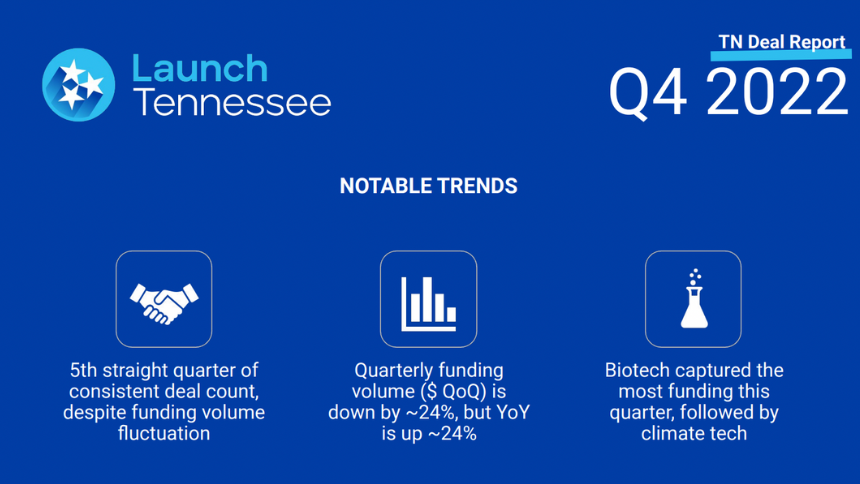 SSBCI never closer than it is now; deals in Q4 concentrated around Nashville.

Launch Tennessee made several announcements this past week that drew headlines.

First, Chief Executive Officer Lindsey Cox reported at Thursday’s meeting of the Board of Directors that the State of Tennessee is in what might be described as the “final home stretch” to secure approval from the U.S. Department of Treasury for its plan under the “State Small Business Credit Initiative.”

The $117 million program is now known as “FundTN” with the $70 million component that Launch Tennessee will administer dubbed “InvestTN,” and the remainder, which will be debt, known as “LendTN.” The remaining action is for the Tennessee General Assembly to approve expansion of the original FY23 budget approved for the Tennessee Department of Economic and Community Development.

Launch Tennessee issued its quarterly “Tennessee Deal Report.” Like the nation as a whole, the Volunteer State saw a decline of almost 25 percent in Q4 funding compared to Q3 but a roughly 24 increase increase from the same quarter in 2021.

Compiled by Evan Prislovsky, Launch Tennessee’s Capital Analyst, the report noted that Middle Tennessee, specifically Nashville, fared the best of the state’s grand divisions. The Music City region accounted for 75 percent of the dollars and resulted in a doubling in the number of Middle Tennessee deals, compared to those in East and West Tennessee combined.