Near the end of the Innov865 Alliance‘s “Investor Series,” sponsored by Three Roots Capital, on Thursday evening, Moderator Chris Miller asked the panelists a series of rapid fire questions.

The event, held in the Community Room of the Knoxville Chamber, focused on the topic of transitioning a business, whether it is a family-owned company going through generational transitioning or simply a private sale. Obviously, the answers to the rapid fire questions posed by Miller, Chief Financial Officer at Three Roots, will have an impact on anyone buying or selling a company. 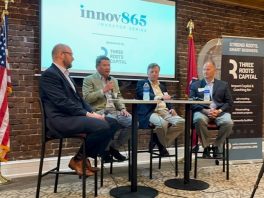 On several occasions, each of the panelists talked about the higher than normal volume of deals underway now, noting the impact of inflation and other economic uncertainties on the stock and bond markets.

“There is so much money chasing deals (that) is driving multiples up,” Smith said. The result is individuals who might not have been considering selling right now reconsidering because of the offers they are receiving and the multiples that are being proposed.

“Typically the first offer is not the best,” Chung said, explaining that “it is imperative for owners to understand where the market in their sector is right now.” He added that “there’s a lot of financial sophistication on the buyer’s side,” so any owner contemplating a sale must be similarly prepared.

Both Smith and Chung attributed much of the deal volume today to private equity (PE) firms including many that are buying one company in a sector like HVAC (heating, ventilations, and air conditioning) to serve as a platform for subsequent acquisitions in that same sector. Then, the value of all acquisitions is greater than the sum of the parts when the PE firm decides to sell the newly constituted business.

Smith advised anyone contemplating a sale in the future to begin planning “very early on. Those companies might be attractive but not saleable” until some changes are made and the existing ownership is positioned to have a successful sale.

In response to one of Miller’s questions, Chung said it has historically taken between six and nine months to typically close a deal, but Tradewinds Advisory recently executed one in 60 days. Smith explained that was possible because the company had clean financials, a great management team that made it a good fit for the acquirer, a solid quality of earnings (QOE) report, and a good mergers and acquisitions (M&A) attorney.

His business partner’s points caused Chung to emphasize the importance of answering questions from the buyer “crisply and accurately.”

What’s the role of an investor – angel or venture capital – in a company who will most likely not be involved after a sale? Vanderhoofven emphasized that the person can be a trusted and known advisor to the business owner as well as an access point for expertise needed such as the M&A attorney and preparer of the QOE report.